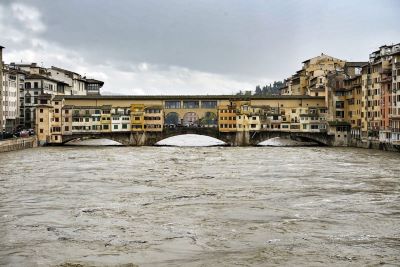 The Arno in flood at Florence. Photo credit: Cristina Giachi/Twitter

ROME – As the floodwaters start to fall in Venice and Piazza San Marco reopens, the city is beginning to count the costs of the historic floods, said Venetian authorities.  Much of the rest of Italy faces an ongoing battle with severe weather.

On Saturday Venice was hit by severe floods for the third time in a week.  Piazza San Marco was closed for the second time.  The damage is expected to run into hundreds of millions of euros, and the city council is appealing for donations.

However, schools reopened Monday and the floodwaters only reached 150 cm, as compared to 187 cm on Tuesday.  The Tide Forecast and Warning Centre predicts heights of just over 1 m for the rest of the week.

The week from Tuesday Nov. 12 was Venice's worst for flooding since 1872 - not since then has the canal city faced two floods above 150 cm and three above 140 cm, said the Corriere del Veneto.  Over half of La Serenissima's 120 churches are thought to have been affected.

In Florence, the river was at the highest levels recorded in 20 years, La Repubblica Firenze reported.  Local authorities have asked people to avoid travelling by car unless necessary and the to avoid the riverbanks.  Along with some smaller towns in the area, Florence was on an orange weather warning for all Monday.

In Pisa, which is also situated along the Arno, schools were closed Monday as a precautionary measure against flooding.  Il Messaggero reported that at the Pisa Normale university, which was also closed Monday, books were moved to the upper floors of the library by the students.  The mayor advised residents to stay at home, and the Army was on standby.

However, local weather agencies report that the water level is beginning to fall, having reached a peak of 4.8 metres, Pisa Today said.  The Tuscan civil protection authorities report lower levels throughout the region.

No such relief comes for Caserta town and province.  Strong winds and heavy rains have caused floods, closed roads and brought down trees.  Schools in the area have been closed.

As a result of the bad weather currently battering Naples, a hotel in Giugliano was evacuated Sunday.  Due to the strong winds, ferry links with the islands have been cut - Capri was cut off Saturday and Procida on Sunday, with the island of Ischia connected by one ferry per day.

In Modena, in the Emilia-Romagna region, a blackout caused by the weather left 10,000 people without electricity.  An estimated 80 mm of rain fell in six hours on Sunday, Modena Today reported.

In Rome, high winds and heavy rain have brought down dozens of trees, leading to the fire brigade being called out 200 times on Saturday and Sunday and the closure of several roads, local authorities reported.

Meanwhile, in Alto Adige, 51 roads are closed due to snowfall, Il Messaggero reported.  Trains are not running, schools are closed in Bolzano, and one town has been cut off following an avalanche on Sunday.  6,500 people were cut off from electricity Sunday, Il Fatto Quotidiano said.