Carabinieri get 12 years for Cucchi murder 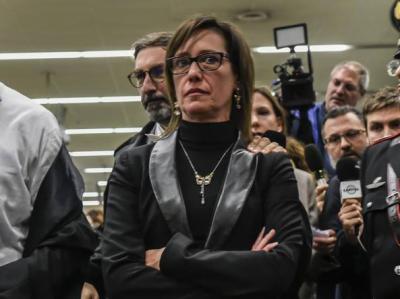 ROME – Two carabinieri officers were sentenced Friday to 12 years in prison for the killing of Stefano Cucchi, who they beat so severely after his arrest that he died in hospital, said judicial sources.

Alessio di Bernardo and Raffaele D’Alessandro were sentenced on charges of unpremeditated homicide and abuse of authority.

Cucchi’s sister Ilaria has fought unceasingly for justice for him in the 10 years since his death.  Il Fatto Quotidiano quoted her as saying, “Stefano was killed, we knew this and we repeated it for 10 years.  Maybe now he can rest in peace.”

The carabiniere Francesco Tedesco, who in 2018 decided to turn witness, was given two years and six months’ imprisonment for lying for the nine years he held his silence about witnessing the beating of Stefano Cucchi.

The commander of the Appia carabinieri station, Roberto Mandolini, was given three years eight months for falsifying the arrest report.

Tedesco said that Mandolini had threatened him to try to stop him telling the truth, La Repubblica reported.

Stefano Cucchi, 31, was arrested Oct. 15 2009 for dealing marijuana.  He was beaten by the carabinieri in Casilina barracks and was then transferred to Regina Coeli prison, said the Corriere della Sera.  He died a week later in the Pertini hospital where he was being treated for injuries.  His family were not made aware of his condition.  They published images of his battered body and face which shocked Italy.

In 2015 investigations into his death finally got onto the right track, thanks in part to carabinieri officers who revealed what they had heard said in the barracks after Cucchi’s death.

“Today… it was recognised that Stefano was killed.  Which both I and all those who wanted to look into this story knew from the beginning.  But it took ten years to recognise it in a courtroom,” said Ilaria Cucchi.