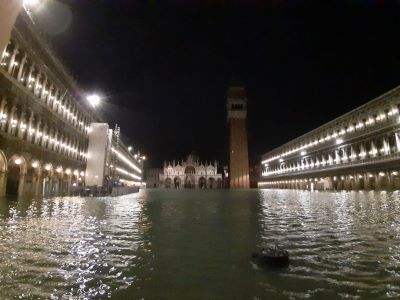 VENICE – Prime Minister Giuseppe Conte has promised that the MOSE flood defence system will be finished as questions are raised over why La Serenissima is still so vulnerable to rising water in the wake of Tuesday's catastrophic floods.

Paola De Micheli, Minister for Transport and Infrastructure who travelled to Venice with Conte on Wednesday, announced Thursday morning that Elisabetta Spitz, former director of Italy's state property office, would be supervising the completion of the flood defences, Il Fatto Quotidiano reported.  The MOSE system of floodgates is still not working 16 years after work began on the project.

The prime minister was expected to announce a state of emergency Thursday after Venice was hit with the worst floods in 50 years.

Venice's flood defences are not a new problem: flood defences have been a topic ever since the “granda acqua” of 1966, the only recorded acqua alta higher than Tuesday’s.  As Corriere della Sera reported, there were multiple plans for defences in the 1980s and 1990s, none of which came to much.

In April 2003, work on the MOSE project began.  A system of floodgates would be able to defend Venice from floods of up to 3 metres - Tuesday’s was just under 1.9 metres.

MOSE was supposed to have been finished in 2012, Il Sole 24 Ore said.  In 2014, over thirty people including the then mayor of Venice were arrested on corruption charges.  Judicial sources said the crimes included diverting the money from MOSE for political bribery.

So far, the MOSE project has cost 5.3 billion euros out of an expected 5.5 billion – a figure that could easily rise to 7 billion, Il Sole 24 Ore said.  Floodgates are in place but cannot yet be raised – and their hinges are already showing signs of corrosion.

Commissioners' failure to test MOSE is coming under particular fire.

Conte has promised that the government will not leave MOSE incomplete.  Quoted in Veneto newspaper Il Gazzettino, he said that it is 93 per cent finished, he said, and “will probably be completed in spring 2021.”

Small comfort for Venetians fighting the floods today.  The estimated cost of the damage runs into hundreds of millions of euros, and Il Gazzettino reports that there may be further flooding on Friday: “The emergency is not over,” said Fabio Dattilo, head of the fire service.

Over 80 per cent of the city is flooded, including some of its most treasured sites.  In St Mark’s Basilica, the windows were broken by the water pressure, the mosaics are damaged and the crypt is underwater.  The La Fenice opera house reports damage, while the Gritti Palace – a hotel on the Grand Canal which has hosted the likes of Winston Churchill – is flooded inside.

The commander of the Venetian local police, Marco Agostoni, told Il Fatto Quotidiano that over 70 boats have been damaged or destroyed.