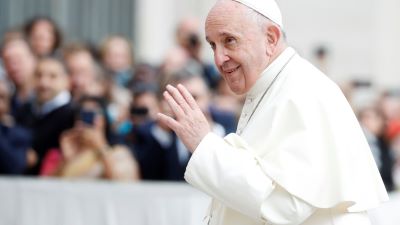 VATICAN – In one of the strongest attacks yet on Pope Francis, 100 conservative Catholics have issued a letter demanding he repent of idolatry, say Holy See sources.

The letter, quoted in Il Messaggero, accuses Francis of idolatry and says that he risks “eternal damnation.”  It also demands that he “repent publicly and without ambiguity.”

At issue is – once again – the Synod on the Amazon and the Pachamama statue, or what according to those who signed the letter are Francis’ “sacrilegious and superstitious acts.”  According to Il Messaggero, the Pope is accused of breaking the first commandment: “Thou shalt have no other gods before me.”

During the Amazon Synod, a ceremony was held in the Vatican gardens with a number of objects from the Amazon present – including wooden statues of Pachamama.  The letter states that “On Oct. 4, Pope Francis participated in an act of idolatrous adoration of the pagan goddess Pachamama.” The letter also objects to the statues being present during a service, including a procession, at St Peter’s.

The objects were placed on display in the church of Santa Maria in Traspontina.  The Pachamama statues were stolen from the church and thrown into the River Tiber in protest, an incident filmed and uploaded to social media.  A young man who has confessed to being responsible stated “I did it to clean the church of pagan symbols,” Il Messaggero said.

The statues were found and a new image of Pachamama placed in the church.  The letter describes this as “a further profanation” and goes on to complain of the “Document on Human Fraternity for World Peace and Living Together” signed Feb. by Pope Francis and the Grand Imam of Al-Azhar, Ahmad el-Tayeb, in Abu Dhabi.

Most of those responsible for the letter to Pope Francis are academics and clerics, although no senior churchmen are among them.

According to Il Fatto Quotidiano, accusing Francis of idolatry is an attempt to label him a heretic, which would require him to be replaced.

In response, Bishop Felipe Arizmendi Esquivel wrote for L’Osservatore that Pachamama is not a goddess, and there had been no idolatry.