Venice ravaged by worst floods since 1966 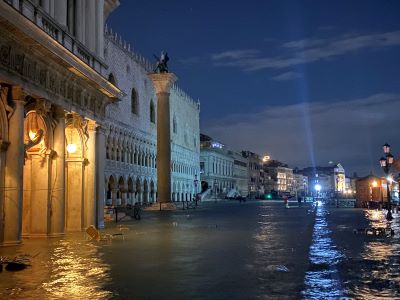 The city was preparing for new damage as the flood waters were expected to rise further with the incoming tide.  A man has been killed on the island of Pellestrina, the area worst hit by the acqua alta floods,  Veneto newspaper Il Gazzettino said. According to the first reports, the man, 78, was electrocuted as he tried to start a pump in his home.

The highest floods ever recorded in Venice were in 1966, when the floodwaters reached 194 cm.  Those of Tuesday and Wednesday are coming close, with a peak of 187 cm, Il Sole 24 Ore reported.

Several fires have broken out due to electrical boxes soaked with water, including at the Ca' Pesaro art museum on the Grand Canal, Il Gazzettino said.

The entire historic centre of the city is flooded, including St Mark’s Square, which is one of the lowest areas of Venice.  There is one metre of water inside the iconic St Mark’s Basilica, Il Fatto Quotidiano said, and the crypt is already completely submerged.  Culture minister Dario Franceschini has sent specialists to verify the damage, said Federico D'Inca, the government's minister for relations with parliament.

Telephone lines have been affected, with the city's Tide Centre itself unreachable by telephone, Il Fatto Quotidiano reported.

All the schools in the city have been closed.  The mayor has said he will declare a state of crisis.

“We’re currently facing an exceptionally high tide. Everyone has been mobilised to cope with the emergency,” he tweeted.  He has blamed the floods on climate change, and said they have shown the need to finish MOSE, a project designed to protect Venice from floods which is still incomplete after 16 years.

"We need everyone to give us a hand and unite against what are evidently the effects of climate change," he said, quoted in Il Fatto Quotidiano.

The coastguard were conducting rescue and patrol all night, Il Gazzettino reported.

"We are facing apocalyptic and total devastation... 80 per cent of the city is underwater, unimaginable, frightening damage," said president of the Veneto region Luca Zaia.

Francesco Moraglia, patriarch of Venice, has expressed "such bitterness with regard to a central silence" meaning the national government, who he says have failed to help Venice.

Meanwhile, the city of Matera in Basilicata, which is the European Capital of Culture 2019, is also battling severe weather.  The area is on red alert, with Matera's historic town centre flooded.