Merkel and Conte agree to cooperate on steel industry 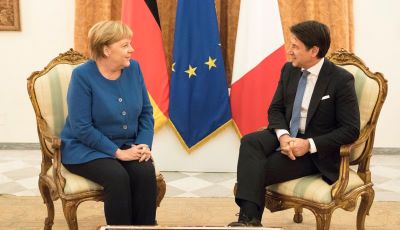 ROME – German chancellor Angela Merkel was in Rome Monday for talks with Italian prime minister Giuseppe Conte.  As well as discussing the future of the steel industry in Italy, the leaders focussed on issues relating to migration and finance, political sources said.

In light of the problems Italy is currently facing with the possible closure of the ArcelorMittal (formerly ILVA) steel plant at Taranto, Conte said “We will work for a solution that balances the protection of health and the safeguard of jobs… It is the challenge of the government.”

Conte and Merkel have agreed to cooperate on the steel industry.  “We have again promised cooperation in trying to compare the most advanced solutions from the technological point of view and in sharing knowledge,” Conte explained, at a press conference with Merkel.

Political sources said Tuesday that the government was split over how to deal with the crisis, with Roberto Gualtieri, the economic minister, ruling out a re-nationalisation of the plant.  According to the Corriere della Sera, Conte is not hopeful that the plant can be saved and is already considering allocating 15 million euros to Taranto to directly support the area.

More generally, the meeting between Conte and Merkel focussed on shared challenges and European-level issues.

“We often find ourselves sharing with Germany objectives and means to reach them, sometimes we are not agreed on the same solutions, but we must continue to work in this direction, we must not increase intolerance and disruptive forces in the EU,” Conte said.

Regarding migration, Merkel thanked Conte for Italy’s work with Libya on the issue, adding that while the cooperation with the Libyan coastguard was important, it was also necessary to work with UNHCR and non-governmental organisations to “guarantee reasonable standards” on human rights.

On banking, she said that she had looked again at the development of risks in the Italian banking system and that Italy had made "considerable progress.”