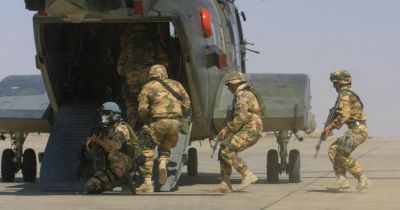 BAGHDAD – Three of the five Italian soldiers wounded in Iraq following an explosion on Monday remain in a serious condition, said defence sources.  The attack has sparked concerns of a resurgence of activity by the so-called Islamic State, say military sources.

The rudimentary explosive device went off at approximately 11 a.m. on Sunday, near to the contested city of Kirkuk.  The area which has apparently seen a recent resurgence of activity by ISIS.  In the last 15 days, 30 incidents of fire or rudimentary devices have been noted, reported Il Fatto Quotidiano.

The bomb hit a convoy of a team of special forces, who had been training local forces, said the Corriere della Sera.  The Italian soldiers requested the help of US helicopters following the injuries.

The wounded soldiers are still in hospital in Baghdad.  None are in danger of death, but one has an internal haemorrhage.  Two have had amputations – one has lost a foot, the other a leg above the knee, said the Ministry of Defence.

It was in the Prima Parthica mission that the soldiers were participating, said Il Fatto Quotidiano.

Lorenzo Guerini, Minister of Defence, immediately informed President Sergio Mattarella and Prime Minister Giuseppe Conte of the incident, and has expressed sympathy with the families of the victims.

According to Marco Bertolini, a retired general interviewed Monday in the Corriere della Sera, the US withdrawal from Iraq is changing the situation there, leading to shifts in alliances.

Furthermore, domestic unrest in Iraq has made the country unstable over the past month, drawing Iraqi security forces' attention away from ISIS and giving the jihadists more space to act, reports the Corriere della Sera.