"Russian Rome" celebrates Russian art in Italy and the world 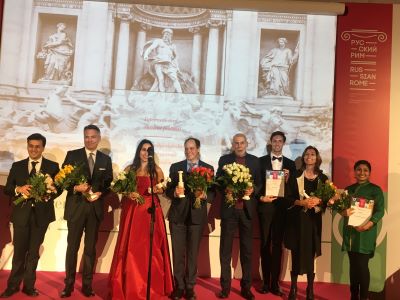 The event was the third consecutive annual Russian Rome festival.  Hosted by Vladimir Torin, its prestigious speakers and prize-winners were key figures from the world of Russian culture – not all of them Russians, however – who had helped to take Russian culture to Italy and around the world.

The Palazzo Poli is known to everyone in Rome – it is the backdrop of the Trevi Fountain.  A stunning location in its own right, Palazzo Poli was also particularly appropriate for the “Russian Rome” festival because it was here that Princess Zinaida Volkonskaya held her most popular “Russian salons.”  These attracted the cultural stars of the age – not only Russians such as Nikolai Gogol but also writers and musicians from around Europe, such as Sir Walter Scott, Stendhal and Adam Mickiewicz.

Sergei Rasov, the Russian ambassador, was present at the event and said

“I am happy that the official agenda of our bilateral relations is being enriched by private initiatives such as the “Russian Rome” festival.  Its taking place in the rooms of Palazzo Poli, where once Zinaida Volkonskaya conducted the “Russian salons” is becoming a beautiful tradition.”

His words were echoed by Walter Ferrara, First Councillor of the Italian Embassy in Moscow:

“I wish a great success to the festival, which represents… the extraordinary richness of cultural relations between our countries.”

Writer Leonid Jusefovic won the prize for literature, and in his speech spoke of the cultural importance of the Russian language.  Barbara Jatta, first woman director of the Vatican Museums, won for figurative arts.  She spoke about her Russian grandmother and the idea of the Russian soul – she had “a little… a fragment” of it, thanks to her grandmother, she said.

Between the awards were musical interludes.  Opera singer Svetlana Kasyan, winner of the prize for music, sang beautifully.  No less impressive was Elena Burova’s piano performance, played with skill and sensitivity.

In her speech Kasyan said she had been “a messenger of Russian culture in the world” for ten years, and that she felt “an immense gratitude” at being honoured at the festival.

Daniele Cipriani, described as “one of the most influential figures in the world of ballet,” won for “Theatre Arts,” while the primo ballerino of the Bolshoi, Jacopo Tissi, was honoured along with Apeksha Bchattarchia, founder of the only Russian ballet school in India.

The prize for “Translation Activities” was taken by an American, Julian Henry Lowenfeld, who speaks six languages and is considered one of the best translators into English of the work of Russian writer Alexander Pushkin.  He was given Russian citizenship by decree, and in his speech said that it was perfectly possible for a person to share American values and the Russian vision of the world.

In the West, there is a myth that Russia is “heavy,” alcoholic, literally and metaphorically cold, he said, before quoting Pushkin to contradict this idea.

The prize for “Patronage,” a new addition to the festival this year, was won by Alisher Usmanov’s charity foundation “Art Science and Sport” although multi-billionaire Usmanov was not present himself.

The “Special prize” went to Andrei Tarkovsky on the fortieth anniversary of his science-fiction art film, “Stalker” and was accepted by his son, Andrei Tarkovsky Jr., who is president of the Tarkovsky Foundation in Florence.

The evening ended with a striking dance performance of “The afternoon of a faun” arranged by Cipriani.