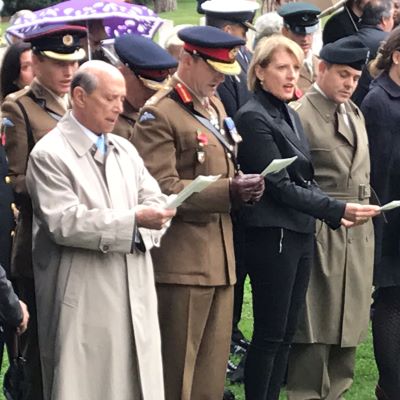 British Ambassador Jill Morris (second from right) at the service

ROME – A remembrance service for war dead was held in the Commonwealth War Graves Cemetery, in the Testaccio area of the Italian capital, on Friday.

Diplomats and military personnel from a number of countries were present, including Jill Morris, the British Ambassador.

The service opened with the hymn “Oh God Our Help in Ages Past” before readings and prayers.  There was a two minutes' silence in remembrance, brought to an end with the playing of the Last Post and the poem "For the Fallen."

The poem “In Flanders’ Fields” by Canadian surgeon John McCrae was also read.  It is from this poem that the tradition of wearing red poppies is taken.

Ambassadors and representatives of embassies laid wreaths in honour of the fallen soldiers.

The service finished with the hymn “I Vow to Thee My Country,” for which the opening lines were sung solo by Sarah Clayton, First Secretary Foreign and Security Policy in the Embassy.

The service was followed by drinks and lunch at the beautiful Villa Wolkonsky, the British Ambassador’s residence.

The Rome War Cemetery, begun shortly after the city fell to the Allies, was used primarily for burials from the occupying garrison, although a few graves commemorate soldiers who died elsewhere in Italy, and soldiers and airmen who died as prisoners of war in Rome.