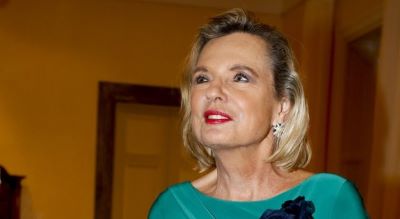 ROME – Poland’s new ambassador to Italy, Anna Maria Anders, daughter of World War Two hero General Wladyslaw, marked the beginning of her new posting and her family's return to the Eternal City with a glittering reception for 300 top people.

Among those invited to her welcome party the other day were important individuals from the worlds of business, politics, diplomacy and culture.  Those in attendance included the Canadian ambassador, Alexandra Bugailiskis, and the Apostolic Nuncio, Emil Paul Tscherrig, as well as a number of Italian diplomats such as Riccardo Guariglia and Michele Valensise.

In her speech, quoted in Il Messaggero, Anders (who speaks fluent Italian) said “I feel at home in Italy.

“Those who know my story know that I am the daughter of General Wladyslaw Anders who fought at Monte Cassino.  I met my husband in Italy and my son was born here.  I am a senator, this is my first diplomatic role.  I know this embassy through having been here other times and I am very happy to be in Rome.”

Anna Maria Anders’ father, Wladyslaw Anders, commanded the Polish 2nd Corps throughout the Italian campaign of the Second World War.  The corps were instrumental in the capture of Monte Cassino after a battle that claimed 55,000 Allied lives.

General Anders died in London in 1970, preferring to stay in Britain than risk execution in Soviet-held Poland, but he and his wife are buried in the cemetery at Monte Cassino, along with his soldiers.  Il Messaggero reports that his daughter visits Monte Cassino frequently, and that the abbot of Monte Cassino, Donato Ogliari, was also present at her welcome party.

Her first official task in the role of ambassador was connected to this wartime legacy – she opened the photographic exhibition “Poland.  Conflict and Sacrifice” situated in the library of the Camera of Deputies in Rome on Sept. 22.  The exhibition deals with the story of Poland and the Polish army in the Second World War and features photographs and newspaper articles from the Battle of Monte Cassino on May 18 1944.

Continuing the theme, she has also been to Naples for the ‘Napoli di Herling’ literary festival, organised by the Polish Institute in collaboration with the City of Naples, the Italian Institute for Historical Studies and two Neapolitan universities.  Held Oct. 24 to 26., the festival was in honour of Gustaw Herling-Grudzinski, the writer, Polish resistance fighter and political dissident best known for A World Apart, about the Soviet gulags.  She met the Mayor of Naples at Palazzo San Giacomo and was given a crest of the city.