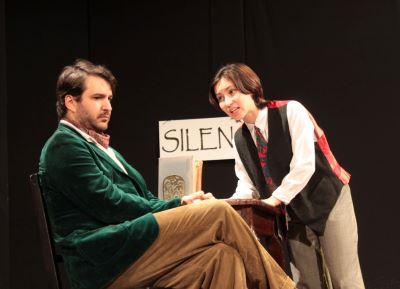 ROME – The Rome Savoyards’ latest production, George Bernard Shaw’s “The Philanderer,” opened with an amusing and thought-provoking performance of a play that, while indisputably of its time, can nevertheless engage a modern audience.

The play, which opened Tuesday night at Teatro San Genesio and is directed by Sandra Provost, deals with a love triangle between Leonard Charteris (Edoardo Camponeschi) and two women.  It provides plenty of moments of social satire even while Shaw explores the life-and-death business of marriage and relationships – a balance well-managed in the abridgement performed by the Rome Savoyards.  It was first published in 1898 as part of Shaw's "Plays Unpleasant," but it had to wait until 1905 for the first production.

“The Philanderer” begins with Charteris trying to propose to widow Grace Tranfield (Camilla Mazzitelli).  The first few minutes are more or less the only moment of reciprocated affection in the play, as Grace quickly divines that Charteris has not broken things off with Julia (Fabiana De Rose).

Julia herself soon enters, determined to win Charteris back, and arguments ensue, becoming even more absurd when Grace and Julia’s fathers both enter.

Much of the play consists of Charteris and Julia going around in circles as she endlessly wails at him.  This gives De Rose a difficult task: reduced to caricature in this performance, Julia’s hysterics soon become tiring.  Although she is allowed to shine in a few comic scenes, the character is not as engaging as the stronger-willed Grace – who, as played by Mazzitelli, becomes a shrewd if not always pleasant person who could have done with more stage time.

As for the philanderer himself, the focus of the play is unquestionably women and their role, leaving Charteris somewhat two-dimensional.  Unfortunately, this also prevents the character with the most lines from being engaging.  Still, he is played here as despicably charmless and shameless, which of course makes Julia’s passion for him all the more insane.

The performance and the writing pick up in the second act, once the exposition is out of the way and there are some more characters on-stage.  This is especially true once we are introduced to Julia’s sister Sylvia (Jax) – excellently portrayed as both a determined young woman and everyone’s irritating younger sibling.  The ridiculous Dr Paramore, here played very entertainingly by Harry McCrory, adds another theme to the play with Shaw’s attacks on medicine.

None of the characters in the play have attractive personalities, leaving the audience uninvested enough to appreciate the satire, for which the plot – which is never really the focus – is essentially an enjoyable vehicle.

There are some criticisms to be made of the dialogue: a few jokes which fall flat, repeating the word “philanderer” so many times it loses all impact, and an abridgement which leaves some lines disjointed.  Yet overall, much of the dialogue remains funny even to a modern audience.

Of course, the discussions of “Ibsenism,” the satire on society and especially the points about being an “unwomanly woman” or an “unmanly man” give “The Philanderer” a dated feel.  The Savoyards are clearly aware that it all sounds even more ridiculous today, and so highlight the comedy but do not try too hard to update it.  Inexplicably, the programme describes the play as “timeless.”  It’s not: done like this, it is instead a good period piece that modern audiences can still enjoy. 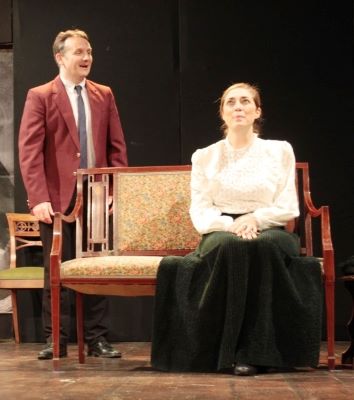