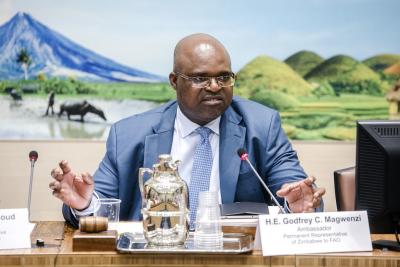 ROME -- The new Director General of the FAO, Qu Dongyu, has underlined his emphasis on the UN agency's work in Africa by appointing as a special advisor a Zimbabwean diplomat, Godfrey Magwenzi, who made headlines in Italy by promoting crocodile meat from his homeland at the Milan Expo universal exhibition.

Mr Magwenzi was previously the Zimbabwean ambassador to Italy and the FAO, presenting his credentials in 2014, meaning that his appointment was approved by the government of the late authoritarian president Robert Mugabe.
His nomination as a special advisor to the new Chinese DG has led to speculation that he could become chef de cabinet at the FAO, replacing Uruguayan Mario Lubetkin, whose contract, like all contracts issued to top managers hired under the previous Brazilian DG, has only been extended to the end of this year.
Also seen as in the running for the key post is the new Chinese deputy chief of staff brought in from the Chinese foreign ministry.
Italy relaxed a ban on import of crocodile meat to allow burgers from the reptile to be sold at Expo in the Zimbawean exhibit.
https://www.theguardian.com/world/2015/jul/15/crocodile-burgers-sell-sna...
Mugabe was a regular visitor to the FAO for shopping trips in the Eternal City with his wife,  using its UN status to circumvent an EU ban on his travelling to Europe.
The appointment of Mr Magwenzi to a position of influence at FAO could raise questions among Western diplomats given that the Mugabe era policy of evicting white farmers from their property in Zimbabwe with a disastrous impact on agriculture currently is being emulated in South Africa, diplomatic sources say.
jp
Embassy Row