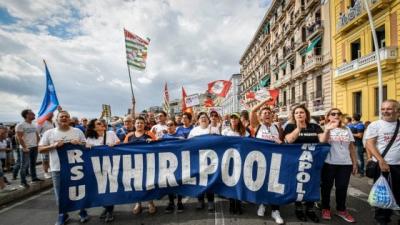 NAPLES – American multinational corporation Whirlpool has withdrawn the procedure for the sale of its Naples plant, announced Industry Minister Stefano Patuanelli on Wednesday.

Whirlpool had wanted to sell the plant, which currently produces washing machines, to a company called Passive Refrigeration Solutions (PRS).

Unions said the move would threaten the plant’s future and the jobs of the 430 workers, leading to a series of much-publicised protests.  Talks broke down earlier this month, and the company announced that production would stop on Nov. 1 with all the workers losing their jobs.

PRS had already said that it would have asked for layoffs and would not have taken all the workers on again, said Il Fatto Quotidiano.

The trade unions have always argued that the transfer would have broken the agreements signed by Whirlpool in 2018.

Patuanelli used a Facebook video to announce that Whirlpool had changed its plans, saying,

“It is a first step that certainly allows us to sit down again at a table to try to definitively resolve the problems of that establishment.”

The company has issued a statement saying that Whirlpool Emea is ready “to withdraw the company branch transfer procedure, not to proceed with the collective dismissal of Naples employees and to continue the production of washing machines,” said Il Fatto Quotidiano.

The company also said that the decision “was taken with the aim of restoring a constructive climate in the negotiations with the Government and the unions” and that the current tensions were “counterproductive” to the attempt to find a solution.

The trade unionists have confirmed that their two-hour strike tomorrow will be going ahead anyway, which is part of a wider strike in support of the Whirlpool workers, Il Fatto Quotidiano reports.