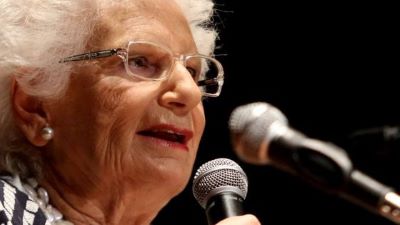 ROME – A motion to institute an extraordinary commission against hatred, racism and antisemitism proposed by Liliana Segre passed in the Senate on Wednesday – but centre-right senators abstained from the vote.

The motion put forward by Liliana Segre, Holocaust survivor and senator for life, passed with 151 votes in favour, 98 abstentions and no votes against after a day spent trying to find a text that all could agree on.

The League, Fratelli d’Italia and Forza Italia abstained, criticising the motion as limiting freedom of expression:

“We do not want gags or a police state that will take us back to Orwell,” declared Matteo Salvini, leader of the League, quoted in Il Fatto Quotidiano.

The Five Star Movement responded by calling the League guilty of “vulgar fanaticism.”

Fratelli d’Italia accused the majority of trying to ban their party.  However, political sources report that there was some discontent within Forza Italia at the abstentions.

“A lost opportunity.  Approving the motion proposed by senator Liliana Segre with the unanimous vote of all the Senate would have been a strong and symbolic signal,” commented Senate vice-president and Democratic Party senator Anna Rossomando.

Nevertheless, the result of the vote was greeted with long applause and senators on their feet, political sources report.