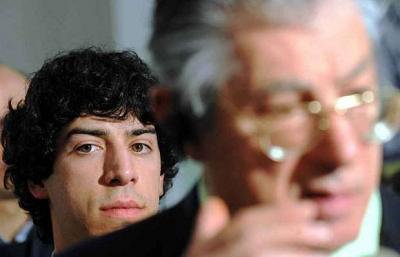 ROME -- Umberto Bossi began his political career attacking the thieving capital, Roma ladrona, as a vampire which sucked the hard-earned taxes of honest northerners. During his 30 year career he attacked what he said was a vortex of corruption to support a lazy, workshy, gangster-ridden south. If even half the allegations against him are true, he has shown that he has learnt how to play that particular political game even better than those he once excoriated.

In the last scene of Animal Farm the animals look in through the window:
Twelve voices were shouting in anger, and they were all alike. No question, now, what had happened to the faces of the pigs. The creatures outside looked from pig to man, and from man to pig, and from pig to man again; but already it was impossible to say which was which.

The great revolution had come to an end with the revolutionaries morphed into their former oppressors.

We poor animals of Italy have been witnessing this scene for some time now. Thankfully the result has been mostly an expensive comedy rather than the bloody tragedy that Orwell was satirising. And even better, Bossi has indeed stepped down, at least for the moment. Today, his eldest son, Renzo, has resigned from the Lombardy Regional Assembly under pressure from the grass roots.

Before that happened, Bossi, his family and close political allies had become more “southern” and more “Roman” than the real Romans and southerners.

Bossi started in a small way in his native Varese, north of Milan working hard to create a northern, populist party, the Lombard League. In 1987, he was elected to the Senate and since then is often referred to as Senatur, the Lombard for senatore. In 1990, he joined forces with the other northern parties which had imitated him to form the Northern League (LN) and in ’92 was both a cause and beneficiary of the collapse of the existing parties. They took 8.6% of the vote for the Chamber and 55 deputies. The following year, they won the local elections in Milan.

With the other parties seriously weakened and a new majoritarian system, in 1994, with 8.4%, they won 102 seats in the Chamber and became part of Silvio Berlusconi’s first government with five ministers. That only lasted seven months until Bossi left the coalition. Next time, in 2001, Berlusconi had prepared the ground better and the government lasted the whole term. Again in 2008, Bossi and Berlusconi were partners. The anti-establishment party has had cabinet ministers for more than nine of the last 18 years.

Right from the beginning, Bossi was way over the top and very soon became a caricature of himself. He was and is coarse in language and gesture with frequent expletives in public, middle fingers and the more traditional Italian translation (left hand in the crook of the right arm followed by a sharp upward movement of the right forearm – the English two fingers, the American one finger are much more economical but less expressive). His deputies waved a noose in the Chamber of Deputies as part of their contempt for political corruption – an irony not lost today. Bossi and his close associates make racist remarks, insult their opponents (including sometime and future allies like Berlusconi) and say that the the national flag should be used as lavatory paper (only he was more explicit). He has no illusions about his son, Renzo, who had to re-sit his maturità, high school exam, twice before passing the third time with a bare minimum; when someone suggested that Renzo was his Dauphin, he said “he’s no dolphin – at best he’s a trout”. Nonetheless, the Trout was elevated to the Lombardy Assembly with a €12,000 per month salary. He is also alleged to be taking a degree at a “private university in London” paid for with LN funds. Today, he resigned from the Assembly.

The LN treasurer also resigned last week after it became clear that he had had links with the Calabrian mafia, the ndrangheta, had probably been creating and using slush funds and had been investing millions of public funds in Tanzania.

Rosy Mauro, the woman who has looked after Bossi politically since his 2004 stroke was made deputy speaker of the Senate where she famously conducted the divisions on a whole bill <http://www.youtube.com/watch?v=Nut1_bg2cik&feature=related>  without taking any notice of the assembly in front of her. That was a couple of years ago; now she is in the news because of her alleged lover whose degree was paid for (€130,000 <http://www.ilfattoquotidiano.it/2012/04/07/dalle-casse-leghiste-ai-kooly-noody/202897/> ) with LN funds and who now has a job in the Senate. Even better, he made his name as an Elvis impersonator and singer in his own right with numbers like “Kooly noody” (or culi nudi – bare bums). After Renzo’s departure today, Mauro cannot be far behind him, at least as deputy speaker.

They have all been dubbed “the magic circle” but the spell is wearing off.

In England, the performance could be “Carry on polenta” (or Madonnina or some other symbol of northern-ness) with Syd James as Bossi, Hattie Jacques as Rosy Mauro, Kenneth Williams as the Trout. Orwell who loved the saucy post cards of Donald McGill would surely smile at some of the League’s antics but tut-tutted the excesses. In any case, I have no doubt that Italian filmmakers are already working on the script – commedia all’italiana has no need to copy foreigners.

The rest is not very funny. The real scandal is not that an anti-corruption party should be caught buying degrees and cars, renovating the leader’s house or investing in Tanzania, it is that they have the funds to do it; these are the so-called “reimbursements” which don’t reimburse real electoral expenses but are part of a massive public funding for political parties.

In political terms, the LN will pay for some of the scandals in next month’s local elections and is going towards a long-awaited showdown between Bossi and his friends and his erstwhile lieutenant and partner, Roberto Maroni. The first test will be tomorrow evening in Bergamo for a League Pride (Orgoglio leghista) rally, the first opportunity for the party faithful to express themselves and show support for either Maroni or Bossi.

The League’s long-term aims of either secession or real federalism or devolution are no closer today than they were in 1994 when they first went into government but they still have the best grass roots organisation of any Italian party. They have taken on and developed the local clientelism that used to be the prerogative of the old parties of the “First Republic” so despite the policy failure and the leadership scandals the League is not dead yet.

It is not only the leaders who have come to look like the old-style politicians.

Bossi and a miss Padania winner 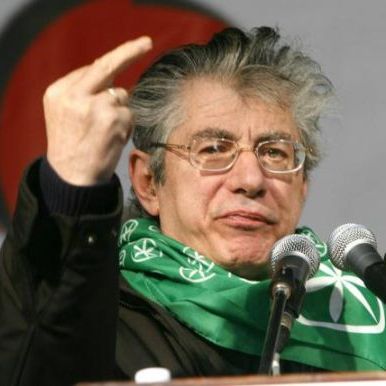