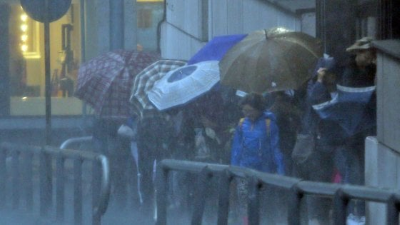 CATANIA – Eastern Sicily was placed on a red weather warning and western Sicily on a yellow one as bad weather hits the island, said local authorities on Friday.

Schools have been closed in five provinces.  In Catania, all teaching activities have been suspended in a number of institutions including the university offices, reports La Repubblica.

According to the order published on the website of the municipality of Catania, localised hailstorms and high winds are expected in addition to heavy rain.  Cemeteries, parks and markets have also been closed in the town.

Five railway lines in Sicily have also been suspended, and in some towns replaced by a bus service.

In Licata, Agrigento, an eighty-year-old man has been missing since Thursday night.  It is assumed he fell into the Salso river as a result of the weather – the alarm was raised by a person who saw his slippers floating in the water, reports Il Fatto Quotidiano.