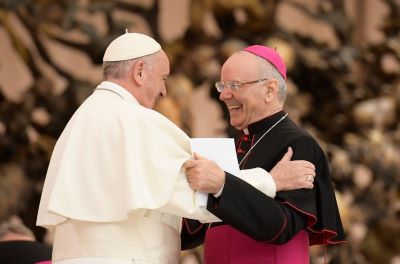 VATICAN CITY – The president of the Administration of the Patrimony of the Apostolic See (APSA) has denied in an interview persistent reports quoting a new book saying that the Holy See effectively is going bankrupt.

“Here there is no crash or default,” Bishop Nunzio Galantino, who is also a former general secretary of the Italian Episcopal Conference, told Avvenire newspaper Tuesday in a report picked up by the Vatican semi-official newspaper l'Osservatore Romano.

Suspicions that the Vatican is in serious financial trouble have been heightened by Gianluigi Nuzzi’s new book, Last Judgement.  Il Fatto Quotidiano reports that Nuzzi, a respected journalist and writer who the Vatican sued to try and silence, analyses over 3,000 confidential documents in his investigative work, and concludes that the Vatican could go bankrupt as early as 2023.

According to Nuzzi, this is due to both poor management and massive corruption, which Pope Francis’ efforts have done little to change.

It is difficult to establish the extent of the debt.  L’Avvenire says that the latest figures available, which refer to 2015, put the grouped budgets of the Roman Curia at a deficit of 12.4 million euros, and the budget for the executive body at a surplus of 59.9 million – but the newspaper also cites Vatican sources who suggest that the Holy See is between 50 and 70 million euros in deficit.

Galantino denied cause for concern in the interview, saying that the debt was not worrying.

As regards the reasons for the deficit, he has said that it was absolutely not due to mismanagement and corruption, but rather the result of increased staff costs.

L’Avvenire reported Wednesday that the bishop was also not preoccupied with the amount of debt, as it was not a new problem, indeed fairly similar to the Vatican’s deficit in 1980.

A spending review was currently being conducted, he said.

“So no alarmism about the hypothetical default.  Instead we are talking of a reality that realises we need to contain expenses.”

Pressed on the budget showing a loss, Galantino said that this was entirely due to an extraordinary intervention aimed at saving a Catholic hospital’s operations and the jobs of those who worked there, and that APSA’s ordinary management in 2018 had come in at over 22 million euros’ profit.  He denied that APSA had any secret accounts.