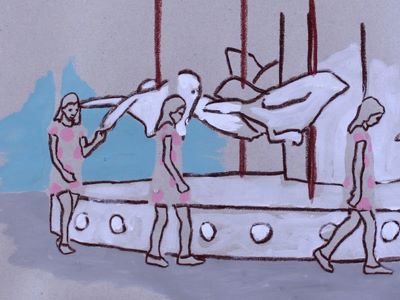 ROME – La Giostra di Nina, or Nina’s Carousel, a short animated film by Valerio Berruti, is being shown at MAXXI, the Italian national museum of twenty-first century art, until Oct. 27.  The film forms part of the crossover between MAXXI and Rome’s film festival.

In addition to the film, there is an actual carousel in the hallway of the gallery.  It is painted white with pale lights, and instead of the usual horses it has birds – it is strikingly elegant and dreamlike compared to the garishness of many carousels.

The carousel ties in to the film, which according to the descriptions published online, tells the story of Nina, a fairground child forced to work by her surly grandfather, and Geppo, “a young man with a childlike soul.”

There are no explanations in the film, which leaves the story somewhat open to interpretation.  It is not obvious that Nina is the grandchild of the man who runs the carousel, and we only know her name through the title: Geppo’s name is not mentioned in the film itself.

However, the outline of the story is clear enough, giving a message that encourages inclusion and understanding rather than the hatred and fear which Geppo faces for not behaving in the way expected by others.

Throughout, the film plays with nostalgia to devastating effect.  Produced by Sky Art, it employs a method that makes use of very little technology.  Indeed, Berruti described it as “tech-free.”  Approximately 3000 drawings are shown at the rate of 5 photographs a second in a short animation.  (Berruti was clear, however, that this did not make the film easy to produce, especially given the difficulty of matching the animation to the music.)

The style is determinedly unpolished and old-fashioned, adding to the traditional air of the film.  In terms of effect produced it is not unlike the cartoon film adaptation of Raymond Briggs’ The Snowman, although even more simply executed.

The silence of the characters (there is no speech) and the simplistic style of the animation might leave the audience indifferent if done badly, but the roughly-sketched faces are enough to convey and provoke emotion when added to the haunting, evocative soundtrack by Ludovico Einaudi.  The same music is played when the real carousel is turning.

It might be questioned who the exhibition is intended for.  Although as a story it is in many ways very sad, it is also clearly a children’s film: a modern-day fairy-tale that recalls many children’s stories.  Indeed, an accompanying pop-up book with a music box included is to go on sale in late November.

For Berruti, who described the carousel first as having a juvenile dimension, and then as something with a “timeless soul,” the physical carousel is a work in which living children become the protagonists.

But in its carefully calculated poignancy it appeals to adults too, calling up our memories of childhood.  Much of the traditional effect might be more effective on adults than it will be on those too young to know nostalgia.

The exhibition, then, both centres on childhood and supports childlikeness in adults, leading them to recall their own childhoods.  Adults as well as children are actively encouraged to get on the fairground ride: an example set by Berruti himself at the premiere.

Even without taking up this invitation, it is difficult not to be touched by “Nina’s Carousel.” In its exploration of childhood, adulthood and how difference is treated by society takes on universal and highly relevant themes.

“Nina’s Carousel” by Valerio Berruti will be shown at MAXXI from 18 Oct. to 27 Oct.