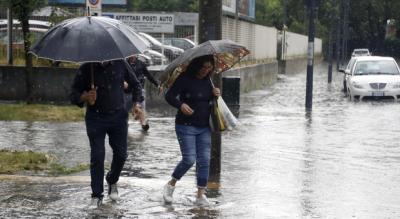 The area between Arenzano and west Genoa was hardest hit with Pegli recording 176 millimetres of rainfall in 6 hours.

On the A10, the Genoa Pegli exit was closed due to flooding.

Coming from France, the storm front will continue to batter “central Liguria in the next few hours,” said the Ligurian Regional Agency for Environmental Protection (ARPAL).

A landslide was reported along the Acquasanta road in the hills of Genoa Voltri, disrupting traffic.

Civil Protection has issued a warning to principals and parents, that schools in Genoa’s west must remain closed.

In Multedo, underpasses from Aurelia to Via Pacoret de Sain Bon were closed. Traffic in San Quirico has been diverted to the Barbieri bridge. Corso Perrone is also flooded. Emergency personnel freed people trapped in cars.

Flooding on rail tracks also forced train slowdowns on the Genoa-Ventimiglia lines between Genoa Voltri and Cogoleto. Railway traffic is operating on one track instead of two with delays of up to an hour and a half and possible cancellations. Bus services have been activated between Genoa and Savona.