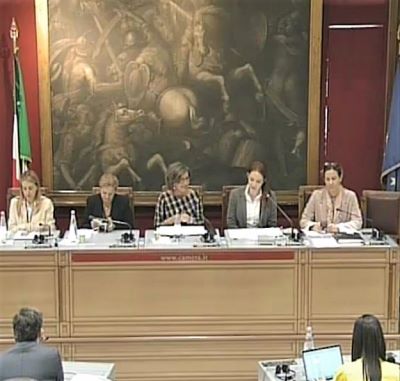 ROME - The European Union's Foreign and Political Commissions, of the Italian Parliament, have recently held the hearing of the Ambassador of the Republic of Finland in Italy, Ms. Pia Rantala-Engberg, on the Finnish presidency of the Council of the European Union (July-December 2019.)

Introducing the session, the President of the Foreign Affairs Commission of the Chamber, Ms. Marta Grande, initially recalled how the priorities indicated by the Finnish presidency for this second half of 2019 are focused on four pillars inherent in: strengthening common values and the rule of law, making the EU more competitive and socially inclusive, strengthening the EU's position as a global leader in climate action, and protecting the safety of citizens as a whole. Other priorities: the global management of the migration phenomenon, and the conclusion of the negotiation on the next multiannual financial framework 2021-2027.

Ms. Rantala has quickly reviewed, answering questions from members of the Commissions, the priorities of the Finnish presidency and the state of the art of their implementation, with particular reference to the European Council meeting on 17 and 18 October. Highlighting how the agenda is not the easiest, Finland is facing it in a pragmatic way even if the cooperation of all Member States is indispensable because "a Presidency cannot achieve results without cooperation with other Member States". The question of values and the principle of the rule of law must still develop in a comprehensive single market, with attention to the digital economy and the use of artificial intelligence it is also necessary to invest in the well-being of European citizens on the basis of participatory growth, with an ambitious and transparent commercial policy based on rules.

The ambassador cited other sectors on which the presidency's activity is taking place: making commitments that will lead the European Union to be a global leader on the climate issue, to develop a policy towards the goal of zero emissions, to develop the circular economy and the bioeconomy. To do this, she said, we need a strong, united and efficient European Union on the international scene, we also need cooperation in the defence sector to protect Europe from cyber crime and hybrid crime.

She recalled how Finland acted as a facilitator for the Valletta Charter between France Germany Italy and Malta, to identify a consensus on a common project, and cited the need for a common long-term policy towards Africa, the relevance of common security policy, the importance of relations with China, Ukraine, Russia.

The implementation of the principles of the rule of law represents one of the priorities of the Finnish Presidency and its objective is the maintenance of a general narrative as positive as possible: rule of law means protecting the rights of citizens with a correct functioning and credibility of the Union European, deepening the dialogue between the various institutions within the EU to prevent some problems. One element of this debate, the ambassador said, concerns conditionality, the link between the granting of European funds and respect for the rule of law. Further commitment is to make the European Union competitive on a global level with its economically inclusive economy with attention to growth policies "This means that we must stress the importance of deepening the single market and a necessary industrial policy cannot work without a single market therefore we need to focus our attention on improving the single market also in relation to the social dimension and the development of digital economy policies ”.

The presidency is committed to the realization of a concrete action plan to implement the European Pillar of Social Rights in all member states, since “it is important to aim at the well-being of our citizens in the development of our regulations in a world where new technologies are absorbing our traditional jobs, enhancing the skills of citizens through education, even permanent training, so that everyone can live up to these new challenges ".

Other non-secondary commitments cited by the ambassador, the strengthening of the monetary union, the fiscal framework, the strengthening of financial security from hybrid and cybernetic threats, these cyber-hybrid threats, wide-ranging cross-sectional and horizontal issues. She recalled that for Finland these aspects have long been an absolute priority: the fight against money laundering and financial terrorism are also priority aspects no less than the problems linked to climate change.

The economic and financial issues have been covered more in-depth by the Finnish ambassador also in a subsequent conference, held at the FeBAF, The Federation of Banks, Insurance and Finance, and introduced by the general secretary, Mr. Paolo Garonna. Here, Ms. Rantala mentioned the EU taxonomy objective, linked to the Action Plan for Sustainable Financing Growth ("the Plan"), presented by the Commission in March 2018 to respect EU commitments in the field of the Paris Agreement on Climate Change and Sustainable Development Goals. The 'Taxonomy', in this context, is a set of criteria aimed at determining whether an economic activity is sustainable and seeks to provide a method for identifying whether a given activity contributes to the objectives of environmental protection.

Overall, the ambassador carried out a complex information process on the key points of the European policies underway in the Finnish semester, not hiding the difficulties and obstacles but also the positive implications.