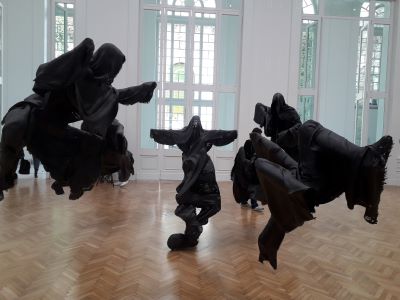 Robert Morris was an American artist often defined as a Minimalist, but who in fact worked using a wide range of different styles.  The exhibition is the first Morris exhibition in Europe since his death in November 2018, presenting Morris’ last works which have not previously been shown in Europe.

The name “Monumentum” was chosen for the reference to death and memory of the word “monument,” the presence of the exhibition in monument-filled Rome, and the echoes of the English word “momentum” with its connotations of a moment of beginning, movement and no return.

But the exhibition’s organisers stressed that it should not be seen as a retrospective display.  Prior to his death, Morris himself was involved in organising it.

The forms suggest the human figure through draping, but the figures themselves are absent.  Some are made from carbon fibre, others from Belgian linen soaked in resin.  They reference a number of major figures of art history, particularly Goya.  This is most evident in the hanging figures recalling Goya’s drawings of witches.

There is something eerie and unsettling about the faceless fabric figures with their empty hoods.  One group have ropes tied around their necks, others are slumped on the floor.  Those suspended from the ceiling are reminiscent of ghosts whereas the stiff, jumbled figures of Criss-Cross, bodies stuck to a wall, look like corpses on a battlefield.

But although they are both menacing and tragic, the folds of stiff fabric often do give the impression of having captured a moment of movement, almost like a camera.  The combination of presence and absence is particularly striking.  They show clearly Morris’ interest in humanity and the human form, and his willingness to address the very idea of existence.