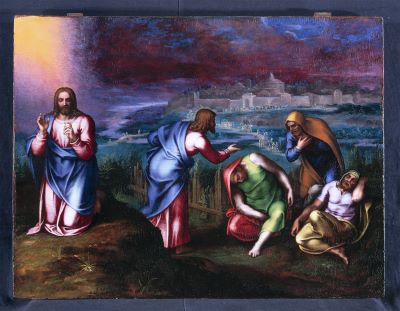 ROME – The new exhibition “Michelangelo in Colour” at Palazzo Barberini opens to the public Friday --it features sketches by Michelangelo and paintings by Marcello Venusti, Lelio Orsi, Marco Pino and Jacopino del Conte.

The small exhibition demonstrates how Michelangelo’s sketches, or “cartonetti” were adapted into paint as part of the dialogue between Michelangelo and his followers.

Giorgio Vasari, Michelangelo’s contemporary and biographer, records that the artist made such drawings for other painters to “colour.”  He made other such drawings to give as gifts to friends, for example to the poet Vittoria Colonna.

As the introductory panel to the exhibition explains, the great success of the sketches started a fashion for reproducing the drawings as paintings valued more for their fidelity to the prototypes than for any innovation.

The most important of these painters was Marcello Venusti, 1512-1579, who arrived in Rome in 1540 and quickly became the most dedicated communicator of Michelangelo’s sketched innovations through paint.

This is the first exhibition to arrange the drawings and paintings by theme, placing the sketches side by side with the painted versions.  However, in a step which the museum's curators acknowledged as "not something we usually do" but "crucial" for contextualising the other artworks shown, the Michelangelo sketches are reproductions of those currently held in other collections.

Thus, Michelangelo’s drawing of the Crucifixion is displayed alongside Marco Pino’s version of the same subject, which shows the influence of the sketch strongly and has never before been displayed to the public.  The two are grouped with Marcello Venusti’s version, which draws on three of Michelangelo’s works to create a rich tableau of figures.

Yet the paintings on display are not simply slavish adaptations without individual character.  This is shown particularly well by the two Venusti paintings, taken from the sketch of L’Orazione nell’orto.  Although they appear similar at first sight, the later version is far more experimental, employing extreme contrast in a way reminiscent of Michelangelo’s own style in late old age, and colours so bright that they are almost fluorescent.

The exhibition, at the National Gallery of Ancient Art in Palazzo Barberini, will run from 11 October to 6 January 2020.