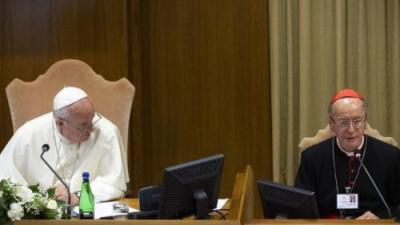 VATICAN CITY - Pope Francis is urging bishops taking part in the Amazon synod not to chase the Holy Spirit away from their discussions, as he launched the first full working day of a summit designed to bolster the Church’s evangelising presence in the region.

Speaking to the 268 participants in the Paul VI Hall this morning, the Pope warned against a “homogenising centralism” in the Church, driven by ideology and which fails to respect local cultures.

Francis told the 185 synod fathers he was “saddened” to hear a “sarcastic” remark about an indigenous man who had brought up the offertory gifts at the Mass in St Peter’s Basilica yesterday wearing a feathered headdress.

"What difference is having feathers on your head and the three cornered hat worn by some officials of our dicasteries?” the pope said to applause, referring to a priest's biretta.

Before getting to work, the synod participants gathered in St Peter’s Basilica gathered in a circle around to sing prayers in Spanish and native languages.

The Pope then joined them, the choir sang the Veni Creator Spiritus – Come Holy Spirit – and Francis, bishops and barefooted indigenous representatives processed from the basilica to the synod hall. The crowd carried an indigenous image of Mary in a canoe, a multi-coloured fishing net and held up placards with images of missionaries killed in the Amazon and St Oscar Romero.

Citing the famous Jesuit missionaries, Matteo Ricci (China) and Roberto de Nobili (India), who sought to embed the gospel into local cultures, the Pope said homogenisation “does not lead to authenticity”.

He said: “Ideology is a dangerous weapon. It’s reductive and leads us to exaggerate our pretence to intellectually understand [a culture] without admiring it or taking it up ourselves.”

He emphasised that the synod was not a parliament, and was not there to propose “social programmes” which “are only pragmatic”.

The gathering, he said, was a “walking together” where the main protagonist is the “Holy Spirit”. He then added: “Let’s not chase it out of the room.”

Francis explained that the synod’s working document, heavily criticised by conservatives, was a “martyr” text which will be re-written. Bishops, he added, were asked to keep their interventions to four minutes, and after every four speeches there would be four minutes of silence. He added that some warned him this was dangerous as people would fall asleep.

But the Pope joked: “At the synod for youth, we saw it was the opposite. They slept during the speeches, at least some of the speeches, and woke up for the silence.”

Francis finished his remarks by adding: “Let’s not lose our sense of humour.”

During his pontificate, the Pope has revamped the synod of bishops turning it into the main vehicle to implement his pastoral agenda. He has shifted the internal workings of the gatherings away from bishops giving grandstanding, disjointed speeches and where final documents are written by curial officials. Instead, he’s turned the synod gatherings into listening and discernment exercises.

Francis has handled a crucial role in the synod to a Brazilian Cardinal Claudio Hummes, a long-time advocate for the indigenous people of the Amazon.

In his speech to the synod fathers, he said: “The Church cannot remain inactive within her own closed circle, focussed on herself, surrounded by protective walls,” nor "look nostalgically to the past.”

Warning against an “inward-looking Church” he said: “It is by moving forwards that makes the Church loyal to its tradition.”

Preparations for the synod included an unprecedented listening exercise where 87,000 people in the Amazon took part in consultations, and the cardinal, who is honorary president of REPAM (the Pan- Amazon Ecclesial Network), said indigenous want the Church as their “ally”.

Due to the “total absence” of the eucharist in many communities, he added, they are also asking for the ordination of married men as priests and recognition of women’s ministries.

“During the consultation stages,” the cardinal told the synod, “the indigenous communities, faced with the urgent need experienced by most of the Catholic communities in Amazonia, requested the path be opened for the ordination of married men resident in their communities.”

He also said that given “the great number of women who nowadays led communities in Amazonia”, there is “a request that this service be acknowledged and there be an attempt to consolidate it with a suitable ministry for them.”

A central part of the discussions will include how Catholic communities can defend the environment in a region devastated by wildfires. Climate change scientists, and Ban ki-Moon, the United Nations’ former Secretary-General will attend the synod as special guests.

Cardinal Lorenzo Baldisseri, the Secretary-General of the synod of bishops, explained that the Vatican would be planting 50 hectares of forest in the Amazon to offset the assembly’s carbon footprint. This would cost €10,000 (£8,912).

The synod, which lasts until 27 October, acts in as an advisory body to the Pope and will produce a final document. Francis is then expected to publish his own post-synodal text.

All of the synod of bishops gathering under Francis have sparked resistance from traditionalist Catholic quarters with the Amazon synod facing criticism from a small group of prelates, largely based in Rome and vocal especially in Catholic media outlets based in the United States.

The Pope said that synod participants were welcome to give interviews to journalists, but encouraged them to talk frankly inside the gathering and not just outside.

He added that in past, "misleading information” about synods was distributed in the media, creating a sense of one synod going on in the hall and another outside it.

This article first appeared in The Tablet.