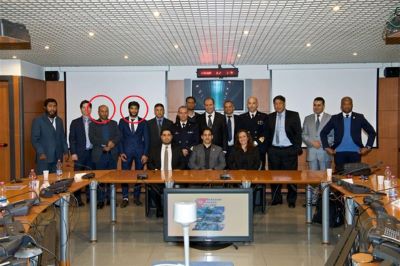 The meeting in Rome, with Bija fourth from left. (L'Avvenire)

Following L'Avvenire's investigation into Bija's presence at the meeting and in response to L’Avvenire’s questions, the United Nations has said that Bija attended the meeting at the request of the Italian authorities, specifically the Ministry of the Interior, and that his visit was not organised by the UN-linked agency International Organisation for Migration, which “only facilitated the logistical aspects.”

After the meeting in Sicily, he appears to have attended another meeting with the Italian coastguard in Rome, L’Avvenire reports, as part of a programme called “Sea Demm” (“Sea and Desert Migration Management for Libyan authorities to rescue migrants”).

The United Nations has accused Bija of being one of the most dangerous of the people-traffickers in Libya, suspected of shootings at sea, drowning people, and head of a criminal organisation in the Zawyah area.  It placed Bija on the list of traffickers subject to sanctions in summer 2018.

He had been identified as a people trafficker in the media as early as 2016.