Banker to the poor woos digital futurists in Capri 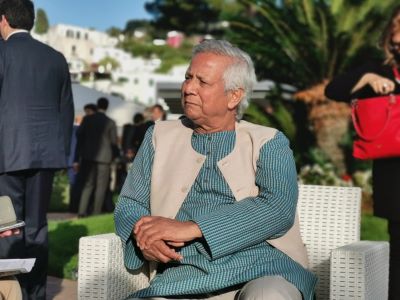 CAPRI - "Capitalism has created massive problems” Nobel Prize peace winner (2006) Muhammad Yunus tells me when we meet at the EY Capri Summit on Saturday. A keynote speaker, whose presence creates an aura of charm and warmth, Professor Yunus earned several rounds of applause and a standing ovation from the 430 participants on the sun-drenched island.

Professor Yunus founded the Grameen (cq) bank, the bank of the poor, in Bangladesh in 1983. The present model of capitalism, with constantly increasing speed and 99 percent of wealth in the hands of 1 percent, and worse, always concentrated in fewer and fewer countries, is on a path to disaster.

This along with climate change and the threat of artificial intelligence (AI) is unsustainable, leaving us with only one or two decades to save ourselves. He questions whether human beings will be able to at all survive if AI takes over the planet.

Fundamental to his vision is that human beings are not motivated only by self interest. To illustrate this he explains his beginnings of what became known as microcredit and micro finance. In 1976 while a professor in Bangladesh Chittagong University he loaned money to poor people, with no intention of making any profit, but simply to meet a need. Banks would not lend to the poor, the poor could only go to “mafia style loan sharks, and who wants to go to a loan shark?” he says. Visiting the poorest people in the nearby village of Jobra, he took money from his own pocket and saw how very small loans could make a great difference.

Running out of his own money, but buoyed by the success of modest loans to the very poorest, including even beggars he began to think of ways of promoting social business based on self sustaining projects with banking meeting social needs rather than accruing profits.

He believes that access to credit is a basic human right and that following old economic paths can only lead to the same disastrous outcome. “People need bifocal glasses, one lens with a dollar sign to do business the other with a people sign to do something for society."

If you are poor your health is poor. He cites as a success story the food corporation Danone that produced tasty yogurt rich in nutrients to simply improve the health of the poor, not for profit.

Conventional bankers thought him absurd even crazy, lending money without collateral - but it works he says, and to the great mirth of his audience he extols Grameen as the only bank in the world that does not employ lawyers. And despite this, the bank claims 99.6 percent repayment of loans to over 9 million borrowers in its 2,600 branches.

Grameen makes sure that the ownership of assets like houses built with Grameen loans stays with the women borrowers. There is no legal instrument between lender and borrower. His mission has been to prove that the poor are credit worthy, his microcredit system is estimated to have lifted seven million of the poor out of poverty.

Following his ill-fated foray into politics Grameen attracted criticism, his detractors casting doubts on long repayments, claiming the bank was bleeding the poor and that its model was unsustainable.

I put this and to a Bangladeshi woman who dismisses the criticism as hearsay and tainted with jealousy.

“He definitely has done a lot to help the poor. His loans would allow a woman to buy a cow and then sell the milk. He has empowered poor women to be independent."

"Nobody else had done anything like that before him." 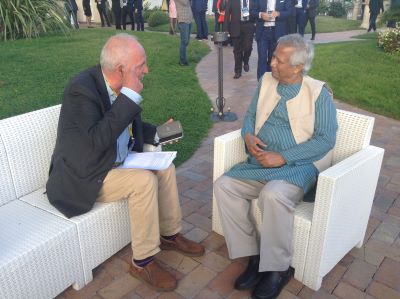