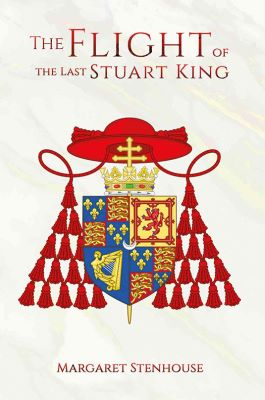 ROME - It is fitting that another expat historian, friend and colleague Margaret Stenhouse, has continued the research on an almost forgotten personage, Cardinal Henry Stuart, with her historical novel The Flight of the last Stuart King.

Stenhouse lives near the town of Frascati where numerous Stuart memories are conserved.  During the 90 year period of exile in Italy, members of the royal Stuart family resided not only in Frascati but also in Urbino, Florence, Bologna and Rome.

The Flight of the last Stuart King narrates the dramatic and confusing happenings during the years 1798 to 1800 when Napoleonic forces were invading the Papal States and Rome. The powerful deacon of the Cardinals found his pleasant life turned upside down when he had to flee from the  comfortable Archbishop’s palace in Frascati for a further exile.

Since the Cardinal’s private secretary Don Giovanni Landò was unable to accompany him during the harrowing two year journey, the account is based not on the Diaries (conserved in the British Library archives, London), but on the few recorded facts. These were  then embellished with the author’s lively narrative and realistic dialogues which bring the characters – real and fictitious - to life.

The Cardinal’s faithful man-servant, Gigi Moretto, and others are based on real life persons who made up  part of the high ranking churchman’s large entourage. In  1764, at the height of Cardinal Henry Stuart’s wealth and influence, his entourage, la Famiglia, consisted of 76 men divided into the Famiglia Alta and Famiglia Bassa. They included the family doctor, cooks, sweepers, secretaries, porters, men responsible for the horses, coaches, houses, wardrobe and even a violinist.

Naples was the first stop on the flight of the exiled King and prince of the Church. Here he was hosted for nine months by the reigning Bourbon family and immersed in the intrigues and atmosphere of the decadent court. He attended soirees by Lady Emma Hamilton, encountered the heroic Lord Nelson, Prime Minister John Acton, Queen Maria Carolina and other members of the court including a dwarf spy.

The two year journey unfolds in a easy flow of descriptions, details and well researched information. The text could well become the screenplay for a historical series similar to those celebrating well known tragic figures of English and European history: Elizabeth I and Mary Queen of Scots.

Sicily and  the island of Corfu were the next stops of the Cardinal’s forced peregrination during one of history’s most confusing moments.  After enduring hardships and many difficulties the weary band led by the ailing 75 year old noble churchman was able to return to Italy. Padova and then the Benedictine monastery on the Venetian isle of San Giorgio Maggiore became their refuge. Here 34  cardinals met in conclave to elect a reluctant new pope, Pius VII, in December 1799.

The Flight of the last Stuart King is an excellent picture of this difficult to understand period of  European history. Margaret Stenhouse makes Cardinal Stuart and his contemporaries come to life and through their story we gain a better understanding of the  happenings and context of this turbulent historic period.