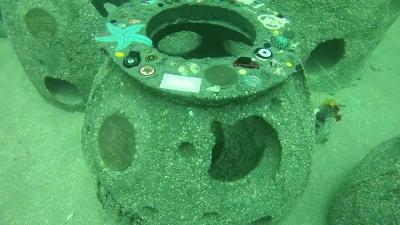 VENICE - The first memorial reef balls in Europe have been used to commemorate three people including two Americans in an unusually environmentally friendly way in the crystal-clear waters of the Venice lagoon. The memorial reef ball is a new way to mark people's deaths, involving placing into the sea a hollow, spherical concrete structure which marine life can immediately begin to transform into a home. The ball may contain a person's ashes, or, as was the case in Venice on Friday, be marked with a plaque.

At a time when the state of coral reefs and the effects of global warming on the oceans are causing international concern, memorial reef balls aim to replicate a coral reef to limit the environmental damage caused by the loss of these precious habitats. The Venetian lagoon is a particularly effective setting for them, as it is a fragile environment and highly vulnerable to erosion, which the reef balls help to counteract.

Moreno Buogo, an entrepreneur from Treviso who was responsible for bringing memorial reef balls to Italy, described them as an “artificial zone of refuge” for sea life, and emphasised how important the reef balls were in protecting the marine environment which is today at such risk.

Steven Berkoff, executive director of Memorial Reefs International, explains that each reef ball is created from concrete using fibreglass rather than metal, so they do not rust, and are pH balanced to the ocean.  The reef balls are expected to last for 500 years, and within two or three years they produce 100 to 200 kilograms of biomass a year.

On Friday, three reef balls were placed near the Isola di Fisolo, where they will help to protect against the erosion of the island.  The Memorial Reefs International company, with their Italian contractors Reef Ball Italia, hope to continue building a reef there and are planning to place with the next ball in April 2020.

Steve Berkoff, of Memorial Reefs International, described the brief memorial event as an emotional experience, and said, “we hope that this is only the first step to continue the realization of an initiative so important for all of us and for the protection of the city of Venice.”

The three people to whom memorials were dedicated on Friday were Harry McCann and John Kruggel, of the United States, and Michele Pagos, of Treviso, Italy.  McCann was Berkoff's father, and Pagos a family friend of Buogo.

At the event, attended by the relatives of the deceased, the memorial reef balls were taken by boat to the island and placed in the water using a crane.  The families said farewells and scattered flowers.

The reef balls are intended to represent a positive way to honour a person after their death, by providing a home for marine life, thus stressing continuity and transformation rather than endings.

“The Memorial Reef project was created to allow anyone to make a small contribution to the protection of the marine environment, in the knowledge that their name will be guarded and linked forever to beautiful and fragile places.  A very beautiful gesture of love which transform a goodbye into new life,” said Buogo.  A sentiment echoed by Berkoff, who explained that Memorial Reefs International tries to make honouring a person in this way a celebration, rather than only an expression of grief.

Buogo emphasised how the reef balls were a memorial in harmony with nature, “something good for the soul.”

His friend and Pagos’ widow, Michela Moro, described how for Pagos death represented more of an evolution than an ending, making the reef ball memorial particularly suitable.

“I want to say heartfelt thanks to my friend Moreno,” she said, “because with the project Reef Ball Italia allowed me to tie the memory of my husband to our sea. It is good to know that the name of Michele will be embraced by the waters of the Venetian Lagoon and closely connected to the first Memorial Reef d'Italia, a project to protect the environment in which my husband believed very much and which he has followed since the first steps.”

Memorial reef balls have already been used for several years in America, with reefs created near to Mexico, where they are secured by divers rather than, as in the Venetian lagoon, by being settled in the water using a crane.  It seems that the idea is already catching on in Europe: Buogo notes that hundreds of people from around the world have expressed interest in being commemorated with an artificial reef.