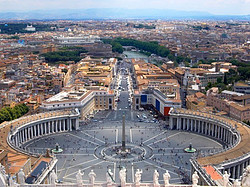 VATICAN CITY – Vatican police have raided the office of the Holy See’s Secretariat of State and the State Financial Information Authority.

The Vatican has issued a brief press statement to say that on Tuesday “activities were carried out to acquire documents and electronic devices” from “certain offices” of the Secretariat and the State Financial Information Authority.

The Secretariat of State is the Vatican’s bureaucratic and diplomatic centre.

The “operation,” continues the press statement, “is linked to complaints presented at the beginning of last summer by the Institute for Works of Religion and the Office of the General Auditor, regarding financial transactions carried out over time.”

The raid was authorised by the decree of the Promoter of Justice of the Tribunal, Gian Piero Milan, and the Adjunct Promoter, Alessandro Diddi.  Sources close to the Vatican describe these as the most important of its judicial authorities.