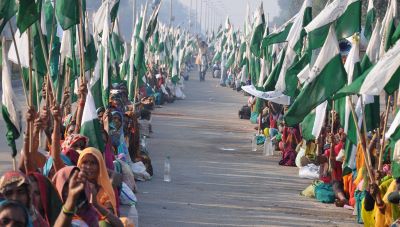 ROME – The Jai Jagat (“Victory of the World”) march begins on Wednesday and will reach Italy on July 25 2020.

The main aim of the initiative, supported by hundreds of organizations around the world, is to raise interest and awareness of important contemporary issues including peace, justice, environmental emergency, poverty, and the empowerment of women and young people.

In Italy, the national launch of the event will be hosted by the Department of Political Science of the Roma Tre University, in parallel with the rest of the world.

In collaboration with the International Land Coalition (ILC), Roma Tre welcomes and supports the event through the work done by a group of students of the Sociology of Communication course, who created the social media campaign of Jai Jagat Italy.

The march will arrive in Italy on July 25th and will pass through a number of cities and towns, including Ancona, Assisi, Rome, Arezzo, Florence, Bologna, Reggio Emilia, Parma, Brescia, and Milan.

The Jai Jagat campaign is based on the vision of nonviolence that guides the popular movement at the heart of this initiative: Ekta Parishad (Unity Forum). This Gandhian organization, representing over ten million farmers throughout India, uses long marches that bring together the poorest and most marginalized people to challenge existing power relationships and induce governments to change policies based on nonviolence.

To ensure the safety of the participants, who will be crossing countries currently involved in armed conflict, the core of the march will be fifty people.

Along the route, local committees will organize events and non-violence training on a daily basis, practising non-violence for the entire year of the march.

The strategy will be to create connections and cooperation between people through different channels, such as art, music, theatre, social media, literature, journalism and education.