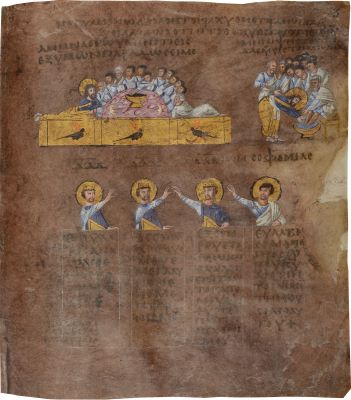 Calabria is sometimes seen as a backward region corroded by a criminal underworld but this afflicts mainly its southern zones.  A recent trip to its northernmost province revealed instead a surprising wealth of resources, including religious witness ever since it was part of the Byzantine empire.

Take Rossano which was important in the Byzantine period and still has an intact town centre.  Its modern diocesan museum has the most ample of all the world’s seven comparable illuminated Biblical codexes. In 2015, UNESCO recognised it as part of the world’s heritage.  Its 186 parchment folios in Greek contain all Matthew’s gospel, most of Mark’s and 15 illustrations.  These are not rigid like many Byzantine images and have revealing details such as a man who covers his nose against the foul smell as Lazarus emerges from his tomb. This is the earliest known pictorial representation of the episode.

Scholars date the codex from the 5th or 6th century and many claim it was produced in Syria.

Byzantine influences were also at work when San Nilo was born into an aristocratic family of Rossano in 910.  He chose the monastic life according to the prevailing Eastern style (Basilian) -and attracted many followers.  But by this time Byzantine control was challenged by raids from the Emirate whose capital was Palermo.

To avoid these raids, St.Nilo shifted to the hills behind Rome where he founded the Grottaferrata abbey which, for just over a thousand years, has been a centre of ecumenism and Eastern religiosity, promoting in particular Greek - Albanian spirituality.

This is still preserved in Civita which, perched high on a Calabrian hill, is classified as one of Italy’s most beautiful villages.  From 1467, it became a refuge for inhabitants of the southern Balkans fleeing Turkish invaders. The descendants have maintained their Catholic faith plus their language, colurful costumes, customs and cooking.

The bilingual, 1000 - strong community has churches with Eastern- style altar screens and icons. Their clergy can marry.   There are about 50,000 people of ancient Albanian origin in southern Italy.

Dante Alighieri, who learnt from Joachim da Fiore to represent the Trinity as a rose, placed ‘the Calabrian with the gift of prophecy’ in Paradise. Originally Joachim followed in his father’s footsteps as a notary but became a brilliant Biblical scholar who claimed that the Old Testament was the age of God the Father, that of God the Son began with Christ’s birth but, from 1260, the Holy Spirit would ensure more direct contact with God. It was a dynamic message about God’s gradual revelation which worried Catholic authorities because, later, some of Joachim’s fans took Francis of Assisi as the new era’s John the Baptist. Moreover, Joachim’s supporters emphasised the decreased role of the hierarchy in his vision.  His influence continues as shown by Umberto Eco using Joachimite ideas as part of the context for his novel ‘The Name of the Rose’ and establishment of the Church of the Spirit of Joachim by the Canadian psychologist-guru Jordan Peterson. The cause for Joachim’s sainthood is still backed by the archbishop of Cosenza.

He seems a figure of a hazy past until one sees a church designed by him, his tomb below it and people intrigued by him: a church Joachim conceived according to his innovative vision stands in his birthplace San Giovanni in Fiore attached to the abbey he directed. The crucifix above the altar and its long, narrow nave are flooded by light from strategically - placed windows.  It was completed in 12O4, two years after his death and Joachim is buried in the crypt.

For the last five years, there have been Joachimite pilgrimages which have ecological inspiration but end at his abbey church.  From 19 – 21 September the International Centre for Joachimite Studies held, in the renovated Abbey, its ninth conference in 40 years on his thought with scholars from European universities, the USA and Monash university of Melbourne.

One Calabrian saint constantly attracts thousands of pilgrims: Francesco da Paola was born in 1416 in the fishing village of that name (Paola).  At the age of 13 he became a hermit. His father was among the followers who eventually joined him.  Francesco was such a miracle worker that contemporaries said ‘any day he doesn’t work a miracle, is a miracle.’

King Ferrante of Naples tried to bribe him with gold but he refused, saying it was derived from his oppression of the poor.  As King Louis IX of France was gravely ill, quacks promising remedies thronged his court but he invited the miracle-worker Francis.  Although Francis was reluctant, the pope convinced him to go. Francis told the king that he was incurable but to prepare himself for death and, in his few remaining months, he led a more Christian life.

San Francesco di Paola founded an Order of Friars (Minims) who practice Lent all year by never eating meat.   There is a superficial resemblance with vegans but they have a spiritual aim: their diet discipline aims to foster charitable aid to others.  They used to number thousands throughout Europe and the Americas but today they are a few hundred world- wide.  However they are lively and in recent years have begun operating successfully in the Democratic Republic of the Congo and the Cameroons.   Among the churches they still staff is the basilica of the Fratte in central Rome, which has both a Borromini spire and statues by his rival Bernini who lived opposite.

Their handsome headquarters in the hills above Paola, which avoids the kitsch of some other sanctuaries, attracts 250,000 pilgrims yearly and 500,000 for the last Holy Year.  San Francesco, the patron of Calabria, even draws people from Calabrian communities in Melbourne and Sydney, though there are no specific Minim activities there, and also from South Korea where Calabresi are scarce.

The witnesses mentioned attest the persistence of a strong spiritual element in Calabria’s turbulent history.  This seems somehow linked to the mountains, intricate and wild, rising over 6000 feet, which inspire some inhabitants to test themselves, to go beyond.

A current challenge is to make best use of these spiritual witnesses as of Calabrian resources in many other fields, historical, cultural and naturalistic.  Cosenza, the major city of northern Calabria with 67,000 inhabitants, is equipped to aid in this as it can be a hub for the future as well as having a rich past – it has one of the centres of a leading information technology group, Ntt Data.  Innovative technology could help Cosenza give full value to the provinces’ varied attractions such as the Swiss-like plateau of the Sila, with ‘purer air than the Arctic’, whose a splendid park has trees 350 years old and museums but also hosts multiple sporting activities.  They can be enjoyed together with beaches such as San Nicola Arcella which the American novelist Francis Marion Crawford called ‘the most beautiful spot on the beautiful Italian coast’.  He bought the Saracen tower which stands by the bay and wrote much of his fiction there. The Calabrian combination of mountains and coast means that both mountain and seaside cuisine are available.

In the 16th century Cosenza hosted a southern Renaissance with figures such as the philosopher Bernardino Telesio who inspired Tommaso Campanella to write his utopic ‘The City of the Sun.’ The city preserves the mystery of the Visigoth chieftain Alaric.  After conquering Rome in 410 AD and taking its churches’ gold (allegedly 25 tons), he led his army south but died of malaria at Cosenza.  He was buried under the bed of one of its two confluent rivers together with his treasure and his horse.  Statues of Alaric and his horse stand at the meeting of the rivers.

Searches for the treasure have never ceased, but even a squad sent by Heinrich Himmler during WW II could not find it, which suggests that the Visigoths may have spread the burial legend and left with the treasure.  Nevertheless there are controversial plans to build an Alaric museum.

At night, from the seven hills above the city, Cosenza is a memorable sight.  Its main thoroughfare boasts open-air sculpture by artists such as Giorgio De Chirico, Giacomo Manzù and Salvador Dali thanks to donations to his birthplace by Carlo Bilotti, a cosmetic millionaire.  As it also has a bridge, whose pylon has struts like a harp, by the Spanish architect Santiago Calatrava, it speaks and appeals to those interested in modern art.

Above Cosenza are the impressive remains of a Norman fortress with additions by the ‘Wonder of the World’, the Swabian Emperor Frederick II.  Another huge Norman – Swabian fortress, moated and painted white, has been refurbished above Corigliano Calabro.

With confidence in its resources and adequate infrastructures, Calabria’s northernmost province will fulfil its considerable tourist potential.