Letter to the Editor: Re FAO and unsavoury regimes 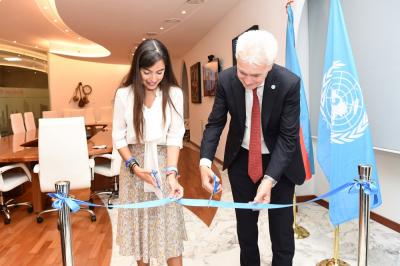 Opening of the Azerbaijan Room at the FAO. photo credit: AZERTAC

Sorry but this time you are not right.

You know very well that FAO is a UN organization with Azerbaijan as one of its member states, just like almost all other countries in the world. The DG cannot be selective in his meetings with heads of state and ministers, who are represented in the Council/Conference that has elected him. Otherwise he should exclude two-thirds of the world’s nations, including his own and the USA.

Please let the Italian Insider stay focused, and don’t start randomly looking for anything to kick against.

With my sympathy and gratitude for your good work in the past years,

Thanks for your note …  I am afraid that here at Italian Insider we don't agree ... at the beginning of his reign the new DG should be particularly careful about his image and with whom he meets ,,, unfortunately the meeting underlines how in the recent past FAO has felt obliged to take money from anyone no matter whether they respect human rights or not -- so at FAO HQ there is the Azerbaijan Room set up with money from Baku etc.,

We know from sources in the FAO press office that Graziano would ask them not to issue photos of him with dubious leaders, Dongyu did not reiterate the orders evidently, of course even under Graziano he could not control the media in the country of the dictator, so we used images from the agency of Equatorial Guinea of him embracing the glorious leader of that vile regime ...

I disagree with you that just because it is the UN all members must be treated equally and with equal obsequiousness, at best one could say it is a gray area in some cases, but unfortunately one where the UN often errs on the side of condoning appalling human rights abuses, for instance in the continued invitations of Mugabe to Rome for world food days when he was banned by the EU from Europe, but Italy let him in, there has been a similar episode over Syria and FAO ... kind rgrds