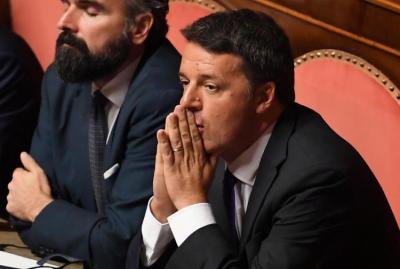 ROME – Former Italian Prime Minister Matteo Renzi has announced he is splitting from the ruling Democratic Party (PD), saying his decision to leave is driven by the lack of a “vision for the future,” La Repubblica reported on Tuesday.

Leaving to form his own party, Renzi said he will continue to support the “Conte Two” government but will be taking around 30 parliamentarians with him.

“I have decided to leave the PD and to build together with others a new house to do politics differently,” Renzi said in a Facebook post.

He also said he wants to spend the next few months fighting Salvini, not defending himself from friendly fire.

“After seven years of friendly fire I think we must take note that our values, our ideas, our dreams, cannot every day be the object of internal quarrels,” Renzi wrote.

Secretary of the DP Nicola Zingaretti condemned the move as “a mistake.”

It is "a mistake to divide the Democratic Party, especially at a time when its strength is essential for the quality of our democracy," Zingaretti wrote on Facebook.

“But now let’s think about the future of Italians, work, environment, businesses, schools, investments,” he added on Twitter.

Renzi, who served as Italian PM from 2014 to 2016, was instrumental in the centre-left’s return to power.

In August, when far-right League leader Matteo Salvini triggered the downfall of the previous government by ending his turbulent alliance with the Five Star Movement (M5S), Renzi united long-time foes, the PD and M5S, thwarting Salvini’s attempt to call the snap elections he believed would make him premier.