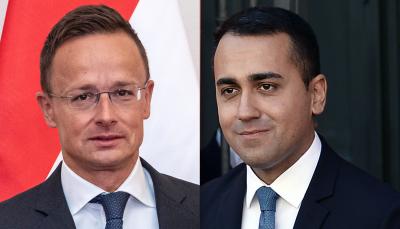 "It is an incentive for traffickers and migrants themselves, who will be able to arrive en masse again," the Hungarian minister said.

"We will never accept reception quotas. We reject it and defend our borders," he said.

"The judgment expressed by the Hungarian government is essentially specious. For years, Italy has been experiencing an emergency caused, above all, by the indifference of some European partners such as Hungary,” Di Maio said.

In fact, European countries, including Italy, are discussing an agreement to allow the distribution of people arriving on the Italian and Maltese coasts.

And just today, France made it known that it has welcomed 26 asylum seekers rescued by the Ocean Viking that Macron had pledged to welcome.

A project that Hungary does not intend to participate in.

“Those who do not accept the quotas must be punished harshly. Italy cannot and will no longer take care of a problem that concerns the whole EU," Di Maio said.

He went on to say, in future, European offices must be established so migrants can apply for asylum and then be transferred to Europe via a humanitarian corridor.

“In this way we put an end to the hell of the people traffickers and boats and everyone assumes his responsibilities," Di Maio said.