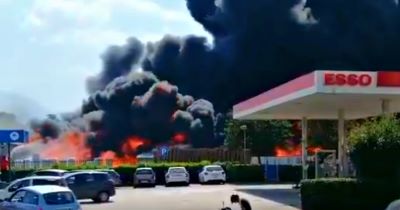 The fire at Avellino

AVELLINO – Following a fire in Avellino, near Naples, which left a toxic cloud hanging over the town, prosecutors have opened an investigation into the environmental disaster and a demonstration in defence of the environment is being organised.

The fire broke out at about 1:30 p.m. on Friday, in the Igs factory producing plastic containers for batteries.  Local sources report that nearby factories were evacuated while people in nearby towns were told to stay home with the windows shut, as the toxic cloud swept over the town.

The prefect of Avellino declared a state of emergency.  100 firefighters were able to bring the fire under control by the early evening of the same day, but residents had to stay indoors for two days.

The area is now returning to normal, with schools reopening.

The public prosecutor, Cecilia Annecchini, has opened an inquiry.

Il Fatto Quotidiano reports that, if another recent fire at a hazardous waste plant in Battipaglia is dismissed as not linked to the case, the most credited theory is that the fire is linked to racketeering.  The investigations of the carabinieri, directed by Captain Quintino Russo, are currently concentrating on this theory.

On September 15 a summit was held to evaluate the monitoring carried out by Arpac on the fine dust that the fire released into the air.  The regional environmental agency has announced that the quantities of various pollutants in the air, such as carbon monoxide, did not exceed the legal limits.  Reports have not yet come in on the concentration of dioxins in the air.

In response to the disaster, the “Salviamo la Valle del Sabato” committee decided to bring forward a demonstration already planed for September 29, which will start from Igs.