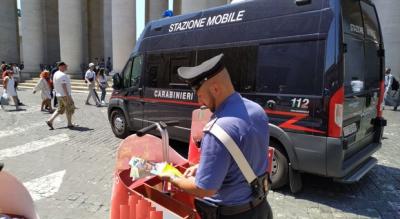 ROME - The ban on ‘skip-the-line’ promoters implemented by the Polizia Urbana di Roma Capitale since June has drastically harmed tour agencies’ businesses and increased the number of illegal promoters on the streets, sources working with tourism disclosed to the Insider.

Malcolm Wetherell, owner of the tour agency Endless Tours, told us that his tour sales dropped between 35 and 40 percent this summer because of the ban. “My agency used to be always full of people. It has been empty ever since the ban began,” he said.

Before the ban, promoters had to sign a work contract with the tour agencies in order to have permission to work at touristic sites. They were also required to open their own partita IVA to pay taxes.

“They paid a four-percent tax. For some of the promoters, I had to keep 20 percent and pay their F24 tax bill,” Wetherell said. “What the Polizia Urbana do not understand is that, by banning all promoters from the streets, they are also hurting Rome’s tourism businesses and income.”

For Wetherell, the city should address the large number of illegal promoters differently. “They could improve the way they monitor the licenses instead of banning promoters from working. What they are doing is inhumane. I don't think they see how this is affecting people.”

The Insider spoke to two 'skip-the-line' promoters who asked to remain anonymous. One of the sources affirmed that “it is ironic how the ban has made matters worse. Now, even the promoters who were legal are working illegally."

“I have been working as a promoter for four years. When the ban was announced, I sent some CVs to try to find another job, but that didn't work. The first day of the ban was a mess. A man was so desperate that he threatened to jump off the Colosseum if the ban was not lifted. I went back home without knowing what I would do with my life,” the source said.

“The next day, I saw that some tour agencies were announcing the time of their tours on their online groups and that some promoters who depended on that to survive were working. I took a deep breath and headed to the street. The risk of being caught was better than the risk of not being able to afford rent,” the source continued. “I was eventually caught and had to pay a 400-euro fine, but I have no choice until I get another job.”

The other source explained that the largest part of the promoters’ income comes from commissions. “The more tours we sell, the better for us. Having to work undercover has of course affected our sales, since it is more difficult to approach tourists. What I make now barely covers my most basic needs.”

The new regulations imposed by the Polizia Urbana, which came into force in June after more than 70 years from the last raft of regulations, also curtail, in addition to the ban on street promoters, behaviours considered inappropriate by the authorities, such as “messy” eating, drinking alcoholic drinks outdoors around touristic sites, and walking “bare-chested”.

Among the main innovations there is the application of the so-called Daspo Urbano, a legislation that had been discussed since February 2017, which allows prohibiting problematic individuals from entering specific areas of the city for 48 hours. In case of recurrence, the individuals can be reported to the Police Chief and be prohibited from entering the same area for 60 days.

In July, a crackdown on promoters and illegal traders in the Colosseum area had over 100 people detained, including people selling water. The Daspo Urbano was imposed to the ‘skip-the-line’ promoters detained, in addition to a 400-euro fine.

According to Wetherwell, tour agencies’ representatives and promoters have been trying to discuss the ban on ‘skip-the-line’ promoters with the Polizia Urbana without success. He affirmed that if they are not heard and do not have their concerns considered, they will protest.