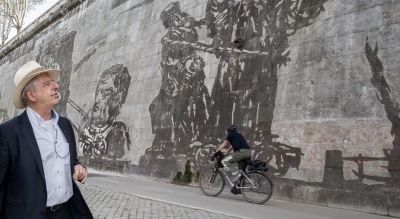 ROME - Artist William Kentridge’s 550-metre-long mural along the banks of the Tiber is disappearing.

The mural, Triumphs and Laments, was inaugurated in 2016, and tells Rome’s history from Romulus and Remus to the twentieth century.

Although it was never intended to be a permanent work,

“It is disappearing faster than I imagined.  I thought it would be visible for at least seven years,” said Kentridge, quoted in Il Messaggero.

The 63-year-old South African artist used a technique known as reverse stencilling, which involved washing the dirt off the wall around the images, to create the work.  Its survival therefore depends, says Kentridge, on factors such as the removal of moss.  However, it is deteriorating at a faster rate than he anticipated, with the process up to two years in advance of what he was expecting.

“Soon it will remain only in the memories of those who have seen it.  Or in the thousands of photos and videos in circulation.  But I like that it should be so.”

In the interview published in Il Messaggero, Kentridge said that he had always seen the Tiber as a strange, quite deserted place, but with the beauty of being a river passing through a city of 2,000 years of history, continually flowing.

Rome itself, he said, was “great and terrible” with its influence still affecting the world today, for instance in the influence of Latin in languages.

Kentridge is currently in Rome for his work “Waiting for the Sybil” at the Teatro di Opera, a new show in dialogue with Alexander Calder’s Work in Progress.