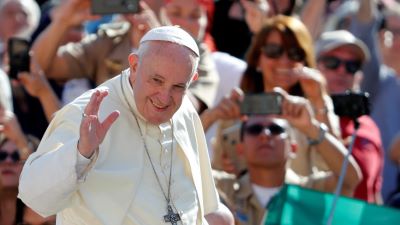 ROME - Pope Francis, returning from his visit to Africa, gave an interview to journalists in which he drew comparisons between the speeches of modern populists and those of Hitler in 1934, and said that he did not fear a schism in the Church.

In the interview, published in Corriere della Sera, Francis was asked whether he was concerned about a schism in the American church.

He replied that there have been many schisms in the history of the church, and stated,

“I am not afraid of schisms, I pray that there are none, because the spiritual health of so many people is at stake.”

He also said that schisms were always an elitist separation, arising from an ideology detached from doctrine, and that “schismatics always have one thing in common, they detach themselves from the people, the faith of the people.”

The Pope said he prayed for dialogue, and correction if there were problems, and spoke of the need for leniency.

Asked about xenophobia, Francis said that it was a disease, with walls isolating those who put them up.

He said that xenophobia is often linked to populism.  “I hear in some places discourses which resemble those of Hitler in 1934.”

This is not the first time that Francis has compared modern populists to Hitler.  He made the same comparison to Hitler’s speeches of 1934 in August, to Vatican Insider, with particular reference to the populist language he described as “us first.”

In the more recent interview, he went on to speak about tribalism, which he called a domestic xenophobia.

He was also asked about the constant criticisms and rumoured plots against him, to which he replied,

“Criticisms always help,” and praised those who had the “honesty” to criticise openly.  He spoke disapprovingly of those who criticised without wanting to enter into dialogue or hear responses.

He also spoke about the need to protect the environment, as he has done many times before.