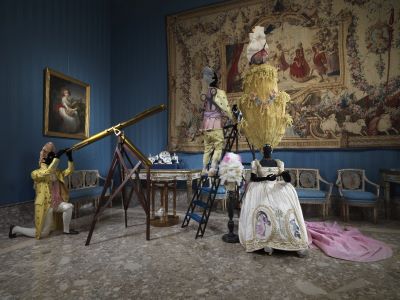 NAPLES – The “Naples Naples: Of Lava, Porcelain and Music” exhibition is opening September 21, at the Museum and Royal Forest of Capodimonte.

Curated by Sylvain Bellenger, it is promoted by the museum in collaboration with Naples’ Teatro di San Carlo, and produced and organised by the Electa publishing house.

The 18 rooms of the Royal Apartment are presented in a spectacular setting, designed by the artist Hubert le Gall as the direction of a musical work.  They form the stage for the Teatro di San Carlo and Capodimonte porcelain, with music, the central theme of the exhibition.

The staging tells the story of Naples in the eighteenth century and beyond, from the years of Charles III to Ferdinand II, in a fairy-tale form.  It features a series of scenes of everyday life characterized by aesthetic refinement and joy, with a background of the changes of power, history, fashion and taste.

Visitors can lose themselves in this enchanted world, and, thanks to headphones, listen to the music chosen for the artistic theme of each room.

The exhibition contains over 1,000 objects, including 600 porcelains from the Royal Porcelain Factory of Capodimonte, more than 100 costumes from the Teatro di San Carlo, musical instruments from the Naples Conservatory of Music, objects of art, furniture and taxidermy animals now conserved at the Zoological Museum of Naples.