Zingaretti, migrant ship ‘must enter, no ifs or buts’ 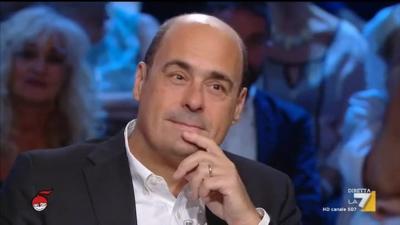 Operated by Doctors Without Borders (MSF) and SOS Mediterranée, the Ocean Viking, which picked up a further 34 people in the early hours of Tuesday morning (including a pregnant woman and a one-year-old child) has requested a safe port in Italy to disembark the migrants.

“That ship, for me, must enter, no ifs or buts,” Zingaretti told La7’s DiMartedì programme.

It was the Sea Watch’s Moonbird aircraft that reported a troubled dinghy carrying 34 people off the coast of Libya on Monday. During the night they were rescued by sailing vessel, Jozefa, which then transferred them to the Ocean Viking.

The new Italian government formed by the PD and the anti-establishment 5-Star Movement (M5S) marks a break with the previous cabinet's policy of closing ports to NGO-run rescue ships.

While new Interior Minister Luciana Lamorgese has been silent on the issue, Prime Minister Giuseppe Conte in the Senate on Tuesday called on “all political forces” to “avoid concentrating obsessively on the slogan, open ports or closed ports” – the issue “needs to be managed at a European level and the Dublin Regulation must be modified.”

New President of the European Commission Ursula von der Leyen supports the revision of the EU’s Dublin Regulation whereby migrants must be fingerprinted and registered in the country they arrive.

"We must reform Dublin, and it is a question that concerns solidarity, which by definition cannot depend on a geographical position," she said. "It cannot be the basis on which a country must assume greater responsibilities, for example, with respect to the arrival of migrants.”

In the meantime, Malta has allowed the last five migrants on board the Sea Eye’s Alan Kurdi rescue ship to disembark after eight had previously been evacuated for health reasons.

The Valletta government agreed to disembark them after two European countries had offered to taken them in and the Sea Eye had agreed to withdraw legal action against Malta.