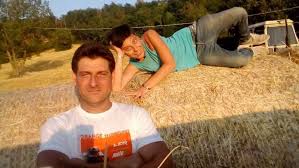 PIACENZA – Forty-five-year-old Massimo Sebastini, who confessed to strangling Elisa Pomarelli, 28, has admitted to watching over and sleeping near his victim’s lifeless body, Il Messaggero reported.

Nicknamed Rambo by Italian media after he posted photos to social media baring his chest while carrying a log, Sebastini told police he visited Pomarelli’s corpse almost every day, holding her hand, repentant and remorseful for what he had done.

“I was obsessed with her,” he said. “That day she told me we wouldn’t see each other again, that it would be the last time. I lost my head and strangled her.”

Security video captured by the cameras of “LM Mortari” – the company where Sebastini worked as a turner – bears testimony to his crime of passion.

It was when Carabinieri viewed the footage of the henhouse, that the crime was upgraded from kidnap to voluntary manslaughter and corpse concealment.

The video shows Sebastini and Pomarelli entering together, but only one person exiting – Sebastini – dragging something heavy and loading it into the trunk of his Honda Civic.

Pomarelli was buried in a shallow grave covered with branches, dirt and stones.

Sebastini was apprehended in the Gropparello area in Piacenza after a 14-day manhunt, along with his ex-father-in-law Silvio Perazzi, who is being held on charges of aiding and abetting.

Perazzi would have hidden Sebastini in his home in the days before the arrest, police said.

According to Fabrizio Marrazzo a spokesperson for Gay Center, Pomarelli “was killed twice, as a woman and as a lesbian because she refused her murderer.”

For this reason the Gay Center is calling for "a law against homophobia" to be approved "which also includes training and cultural paths from primary school and society, to reduce prejudice and discrimination against women and lesbian, gay and trans people.”

One of Pomarelli’s sisters, Francesca, has taken to social media to unleash her anger against Sebastini – “If you were seriously repentant you would accept life in prison with head bowed,” she wrote. “The least you could do is rot in jail. Now you cry, eh? Dear me, you haven’t crossed my path yet … we will do everything to ensure Elisa has justice.”

The autopsy to determine the exact cause of Elisa’s death is expected to take place on Wednesday.

Meanwhile, a man has been arrested in Sicily over the kidnapping and rape of a young woman he asked for help by telling her, ‘my wife is sick.’

On Sept. 2, the woman, who was driving home after celebrating her birthday at a friend’s sea-side home, saw a man in the middle of the road, waving her down.

“She was alone in the car … she had no choice but to stop otherwise she would have run him over and she thought something had happened, and that he needed [help],” the investigators said. “The man asked her for help because his wife had an illness, therefore the victim wanted to call for help.”

When the woman, still sitting in her car grabbed her phone, the man tore it from her hands, slipped his arm through the window and opened the door, police said.

“With a large stone in his hands, he had threatened to kill her if she hadn’t moved to the passenger side,” police said. “The woman, in shock, could do nothing but obey.”

The perpetrator took the woman to an isolated area and after raping her, drove her around for hours, then began to abuse her again until the next morning.

The woman called her family who immediately took her hospital.

Vittoria police, in the province of Ragusa, arrested the man “thanks to the cooperation of the victim and video surveillance images.”

The detainee, who had prior convictions for sexual assault and robbery, committed an almost identical offence against a Ragusa woman and was subject to an ‘obligation of stay.’