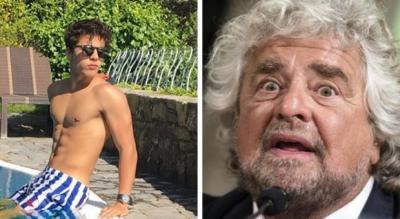 ROME – Ciro Grillo, the 19-year-old son of comedian and Five Star Movement co-founder Beppe Grillo, has been accused along with three friends, of taking part in the gang rape of a model, Italian media reported on Friday.

The Scandinavian model, who met the boys at a disco on Sardinia’s Smeralda Coast on July 16, reported the alleged rape to police 10 days after the incident.

Public prosecutor Laura Bassani questioned the four boys – all sons of professionals – for hours on Thursday, according to La Stampa.

She claims initially to have been alone with one of the boys but then the other three joined in, and that sex took place against her will, accusations the boys have denied.

The boys’ lawyers argued that the model’s story contained “weaknesses,” citing the woman’s delay in reporting the incident. They said a report was filed only when she returned to Milan, after continuing her holiday for another week and publishing photos of the trip on social media networks. Even after the alleged rape had taken place.

Investigators have found video of the evening on one of the boys’ phones.

But the interpretation of the footage is reportedly "not univocal.” In other words, it’s ambiguous.

According to the young woman, the video shows the violence.

Defence lawyers, however, disagree. They said the video demonstrates that the sexual relations were consensual.

Investigators are also evaluating the state of the girl at the time of the incident to determine whether her psychological state was altered by drugs or alcohol, which may be considered an aggravating factor in the crime of sexual violence.