PD defends Bellanova against attacks over her appearance 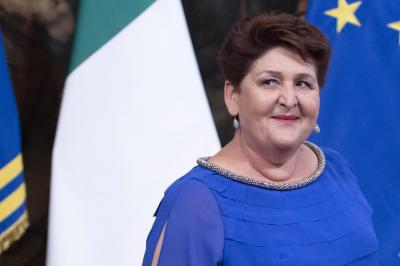 ROME – Democratic Party (PD) secretary Nicola Zingaretti and former DP leader Matteo Renzi have come to the defence of new Minister for Agriculture Teresa Bellanova after she was attacked on social media for her dress sense and lack of advanced education.

“With Teresa Bellanova. No ifs and buts. Me and all the PD,” Zingaretti tweeted in defence of the former trade unionist.

Among the insults on social media over her choice of outfit for the swearing-in ceremony at Quirinal Palace on Thursday, were those of former parliamentarian Daniele Capezzone who tweeted – “Carnevale? Halloween?”

As for the controversy over the minister’s qualifications, deputy secretary Andrea Orlando intervened – “Proud of the Democratic Party that brings a former labourer to the country’s government. Bellanova has eighth grade but has studied at the university of social struggle. She often has very different ideas from mine but the reasons why you are insulting her are those for which I respect her the most.”

"Whoever insults Teresa Bellanova for her dress, for her physique, for her past as a farm labourer who became a trade unionist and then a minister is not worthy of a public controversy, he is simply a sad person,” Renzi wrote on Facebook. “People who quibble like that only need to be pitied, not even criticized. But I want to make a wish to those who mock physical characteristics (almost always on women, who knows why): I wish you to be able to experience at least once the emotions of beauty and wonder that people experience when they listen to Teresa, her passion, her story. Just think of her speeches at Leopolda: nobody ignites the audience like her. Because the life of those who spend time hating others on social media is sad. It would be more useful for you to learn to love in real life. And to love yourself. If anybody thinks that Teresa can be stopped by some insult, well, it's your problem. You don't know her. You don't know us.”