Migrant ship urgent plea to dock, we have no water 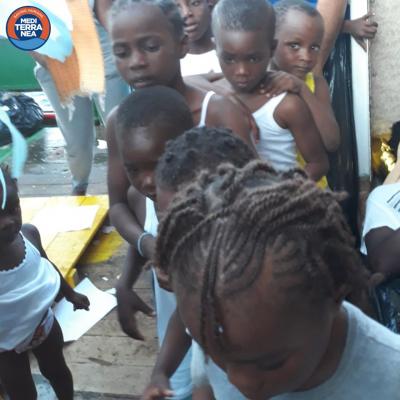 LAMPEDUSA – After going more than 40 hours without water, medical staff aboard the Mare Jonio of Italian NGO Mediterranea Saving Humans, have issued a new urgent request to dock, due to the risk of a sanitary emergency, the NGO said on Friday.

A total of 64 migrants – women, children and the ill – were authorised to disembark Thursday but for those who remain on the ship, the situation is said to be critical: there is a lack of water “intended for hygienic use and other on-board needs, the lack of which, the authorities had been informed as early as yesterday morning,” the NGO said.

Thirty-four people are still stranded on the edge of Italian territorial waters after Italy’s outgoing Interior Minister Matteo Salvini, Minister of Infrastructure and Transport Danilo Toninelli and Minister of Defence Elisabetta Trenta signed a ban on entry into Italy.

"We emphasize that this emergency cannot obviously be solved by simply sending bottles of water,” the NGO continued. “Also alarming is the presence on board of waste resulting from the rescue and extended stay of migrants, such as clothes impregnated with petrol and excretions. The risk of community diseases is aggravated by the lack of water, which could result in damage to the health of migrants and crew.”

Meanwhile the 64 migrants, including pregnant women and 22 children with their families, who disembarked the Mare Jonio, spent their first night at the Lampedusa hotspot.

"We strongly ask that these [remaining] shipwrecked people, together with the crew, can land as soon as possible,” said the Mediterranea. “On board the situation remains precarious … only one bottle of water remains.”