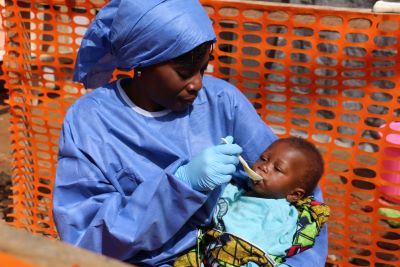 ROME – The United Nations World Food Programme is putting together an emergency response to provide food to Ebola survivors and those potentially carrying the virus.

On August 31, UN Secretary-General Antonio Guterres is travelling to the “epicentre of the Ebola outbreak” in the Democratic Republic of Congo to highlight efforts being made by the international community to deal with the crisis.

The situation in the Democratic Republic of Congo is critical.  13 million people are food insecure and in need of humanitarian assistance across the country, which is suffering the world’s most severe food crisis after Yemen.

Concerning the Ebola outbreak, since the beginning of the epidemic there have been 2,861 confirmed cases.  The virus recently spread to two new health zones which had previously not reported any cases: Mwenga in South Kivu and Pinga in North Kivu.

However, almost 500,000 people have received food from the World Food Programme (WFP) since the beginning of the Ebola outbreak in August 2018. Good nutrition is key for those recovering from the disease and for those otherwise affected by it. Weekly food parcels for a four-week period help limit the movement of people potentially carrying the virus.

“We are working not only to save lives on an urgent basis, but also to contain the virus so that it doesn’t spread further,” said Susana Rico, WFP Emergency Coordinator in Beni, in the Democratic Republic of Congo. “Our task is very challenging because the area is plagued with insecurity and infrastructure is inadequate. With the rainy season starting soon, it will be even more difficult to access the most remote areas.”

WFP - through the UN Humanitarian Air Service (UNHAS), which it manages - provides air transport and swift access for humanitarian workers needing to reach out-of-the-way areas. Since the start of the Ebola outbreak in the Democratic Republic of Congo in August last year, UNHAS has transported more than 26,000 Ebola response personnel.

In addition to such work, WFP also supplies transport, warehousing, distribution services and the setting up of infrastructure. In the Democratic Republic of Congo, WFP has built three accommodation camps for Ebola responders.