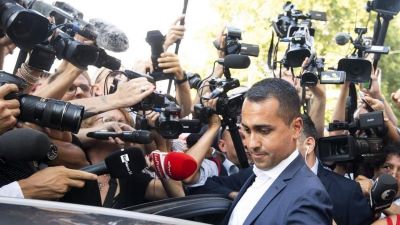 ROME – Nicola Zingaretti, leader of the Democratic Party, has made official his party’s agreement to a second government under Giuseppe Conte, after meeting with President Sergio Mattarella, political sources said Wednesday.

“We have told the President we have accepted the Five Star Movement’s proposal for prime minister” said Zingaretti.

Zingaretti stressed that this was a new government, rather than a continuation of the last one, saying that there was “no handover to follow.”

Coalition talks between the Democratic Party and Five Star Movement ran into difficulties with disagreements over the office of deputy prime minister.

Political sources said that the Democratic Party would regard a government with Giuseppe Conte as prime minister and Di Maio as deputy as unfair to them.

“There are not vetoes on Di Maio, he is not a problem.  The question is structural: if the prime minister will be Conte, choice of the Five Star Movement, the deputy prime minister should be a representative of ours,” said Andrea Orlando, vice secretary of the Democratic Party, quoted in La Stampa.

On Tuesday morning, talks between the parties were cancelled following an alleged request by Di Maio for the interior ministry.  However, Conte then intervened to say that Di Maio had never made that request, and the talks continued, reported Il Messaggero.

Di Maio has now said that he will consult Five Star’s base movement over the Rousseau online platform.  According to political sources, Five Star Movement’s voters are increasingly dissatisfied with Di Maio over these negotiations.

"I ask Mattarella this: you spoke of a strong government, with a large majority and shared positions, can you make a government where the only link is hate for me and the League?  I hope the president will acknowledge that this stuff does not represent the people."  He asked Mattarella to "put an end to this shameful spectacle" and to hold elections.

Meanwhile, President Donald Trump has given his support to Conte via Twitter, describing him as a “very talented man who will hopefully remain Prime Minister.”  When the tweet was first posted, the president had misspelt Conte’s first name as “Giuseppi.”