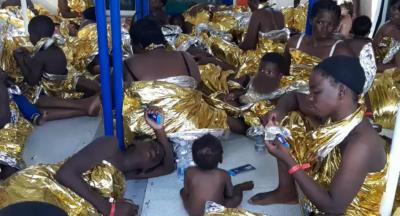 ROME – Women, children and the sick have been authorised to disembark Italian migrant rescue vessel Mare Jonio, which rescued some 100 migrants from an inflatable boat off the coast of Libya, Interior Ministry sources said on Thursday.

While permission has been granted for those most vulnerable to disembark, for all others, the ban on entry into Italian territorial waters remains.

“As always done in the past, women, children and the sick will be able to get off. The prohibition of entry and disembarkation remains for a ship that does not respect the laws and causes the state of necessity on board to land in Italy,” sources at the Interior Ministry said.

"It is not always possible to differentiate between people who are in fair condition and people who then need to be evacuated urgently. This is absurd,” Mediterranea Saving Humans NGO spokesperson Alessandra Sciurba told Adnkronos. “They are war refugees who have the right to be welcomed. We can’t inflict further violence before getting them to a safe haven.”

Twenty-six women, 8 of whom are pregnant, 22 children under the age of 10 and at least six other minors were rescued by the NGO from the overcrowded raft found drifting 70 miles north of Misurata, Libya, at dawn Wednesday morning.

Mediterranea Saving Humans, which announced Thursday morning it had reached the limit of territorial waters, 13 nautical miles south of Lampedusa, has sought permission from Italian authorities to enter the Ionian Sea and “take shelter.”

The plea followed an entry ban preventing the vessel from entering, transiting or stopping in Italian waters, signed by outgoing Interior Minister Matteo Salvini and countersigned by Minister of Defence Elisabetta Trenta and Minister of Transport and Infrastructure Danilo Toninelli.

"To our repeated requests for safe havens made to the authorities of our flag, still no response,” NGO Mediterranea Saving Humans said. “We are sharing information on this situation with our brothers and sisters on board: we are all in the same boat. For us the rescue will end only when each of the castaways is on the ground, cared for and assisted.”

The situation has been complicated by worsening weather conditions.

"'At this time there are waves over two meters high, making life onboard the Mare Jonio very difficult,” the NGO said in a statement.

The rescued migrants, 98 in total, from the Ivory Coast, Cameroon, Gambia and Nigeria said they had spent at least two nights on the raft.

The ship’s medico, Dr. Donatella Albini, had identified cases of hypothermia, especially among children, as well as signs of torture (including women with genital mutilation) and several burns to the body due to prolonged contact with gasoline.

Meanwhile, German charity Mission Lifeline is still in limbo after its rescue ship, Eleonore, which saved 101 migrants aboard a dinghy that was sinking off the coast of Libya on Monday, was banned from entering, transiting or parking in Italian waters.

The ship's crew, who have also been denied entry to Malta, had complained that the island nation had denied them food and water.

“Malta wants refugees and crew to die of thirst on the Eleonore,” said Claus Peter Reisch, the captain of the Eleonore.

In a Twitter post Thursday, the NGO said it has received food and water and called for solidarity as it awaited a safe haven.

"In the absence of any support from governments, we are once again left alone with our confused and exhausted guests. A resupply of fresh food and water has been sent to @MV_Elenore but it's no substitute for peace and safety. We call on everyone to stand with us in solidarity!"

“Conte one, two or three. Content counts, not ministries and ultimatums," Democratic Party Senator Davide Faraone wrote. "There is the Lifeline with 101 people on board to which the minister #Salvini has closed the ports. Is he acting on your authority or not? Enough with these inhumane policies. Enough!”

“Salvini closes the ports to the Lifeline NGO with 101 people on board. Premier Conte, while we talk about possible governments between an ultimatum and the other, could you kindly prevent those who act on your authority from continuing with inhumane policies? Speaking of discontinuity.”