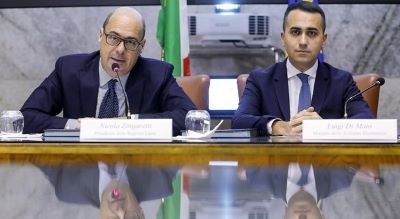 ROME – The Democratic Party and Five Star Movement were still discussing the possibility of a coalition ahead of Tuesday’s second round of consultations with President Sergio Mattarella.

Disagreements over whether Giuseppe Conte, who resigned the office on Tuesday 20, should be prime minister again were proving the hardest to resolve.  Nicola Zingaretti, leader of the Democratic Party, was refusing to accept the Five Star Movement’s demand that Conte hold the office in a new government.

Before establishing the timetable for the consultations on Tuesday and Wednesday, Mattarella expected the parties to outline their situation on Monday evening, local sources reported.

A coalition between the Democratic Party and Five Star Movement is now looking more likely, according to Il Messaggero.  Yet although both say they want to form a coalition, the demands of both sides are making it difficult to reach an agreement.

The question of who will be prime minister is the most serious problem.  The Five Star Movement, who are led by Luigi di Maio, are insisting on Conte taking the office again.  However, Zingaretti has spoken of the need for a “turning point” and change.

There is now less probability of the Five Star Movement finding an agreement with the League, according to political commentators, despite League sources saying that the leaders of the two parties were in contact.  The League’s popularity has been falling since the government crisis.  From polling at 38.9 per cent in late July, they are now at 33.7 per cent, according to a poll by Winpoll published in Il Sole 24 Ore.