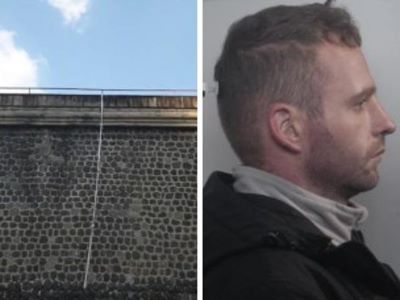 NAPLES – A Polish prisoner, who used a rope made of knotted sheets to escape down a prison wall, has been recaptured just one kilometer from notorious Poggioreale prison, police said on Tuesday.

Robert Lisowski, 32, was arrested in the Borgo Loreto area of Naples on Monday evening after his dramatic film-style break out on Sunday.

Investigators believe Lisowski, accused of murdering a 36 year-old Ukrainian, remained in the area counting on the support of friends.

“A prisoner escaped from Poggioreale; big deal? Why the surprise over an escape from prison? It is the most natural thing that could happen, what is unnatural is keeping people locked up in an inhumane and degrading situation,” prison chaplain don Franco Esposito wrote in a social media post, criticising the prison, which is known for being overcrowded.

“I am absolutely not justifying the event of a criminal but I would like to note that prisons like the one in Poggioreale certainly do not have the requisites to be re-educational and certainly not for the reintegration of the person detained into the fabric of society.”

The details of how he reached the wall without being noticed remain unclear.  Lisowski, who was one of 200 prisoners who had attended mass in the prison chapel, may have managed to separate from the group being escorted by prison officers back to their cells, Il Messaggero reported.  Having reached the wall, he used the sheets to climb down.

Lisowski, who had lived homeless in Naples before his arrest, was awaiting judgement on the charge of having stabbed a man to death.

Questions are now being raised over matters such as whether the CCTV system at Poggioreale was properly working, if the number of prison police needs to be increased, and more simply how Lisowski was able to obtain and conceal so many sheets.