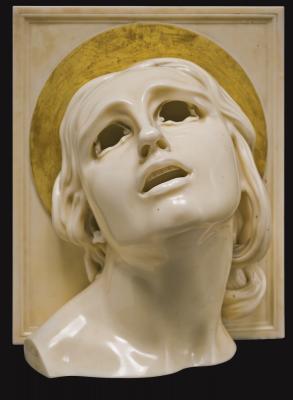 LIVORNO – Executives of Sotheby’s Italy and non-profit organization Italian Union of the Blind (UIC) are under investigation for the alleged auctioning of a statue secreted to London without the knowledge of its true owners, LivornoToday reported.

Filippo Lotti, Managing Director of the prestigious auction house in Italy, and three executives of Italian Union of the Blind in Livorno – President Roberta Foresi, Vice President Alberto Corda and Seeing Managing Director Roberto Bandinelli – are suspected of embezzlement; receiving stolen goods; and the violation of two articles of the Cultural Heritage Code concerning the alienation of cultural property and the transfer abroad of objects of artistic interest.

Ignored for more than 50 years at its home at Palazzo Frediani, which is owned by Livorno’s Azienda Sanitaria Locale (ASL), the Santa Lucia by Italian sculptor Adolfo Wildt had secretly been transferred from Livorno to London in 2015, where it went under the hammer on Dec 16, earning 660 thousand euros.

The Livorno ASL has owned the local UIC branch since 1980 and, after their own internal checks to determine who owned it, the healthcare company came forward in early 2018 to claim the Santa Lucia and brought their complaint to the Public Prosecutor’s Office.

Preliminary investigations judge Mario Profeta has ordered the seizure of the proceeds of the auction, which stand at 484,638.36 euros.

The sale of the Santa Lucia by the UIC president would have taken place without a title and transferred abroad without the prior viewing of the Superintendent of Cultural Heritage of Pisa and Livorno.

Some members of UIC had already distanced themselves from the matter when the auctioning of Wildt's bust had been discussed at an assembly on Nov. 28, 2015. Even before any judicial implications had been foreseen, they were firmly opposed to its sale, but this didn’t stop the association’s executives. The case prompted an internal division within UIC – the national president, Mario Barbuto, had criticized the Livorno branch and said that if he had been aware of the initiative he would have opposed the sale.

Even the Livorno municipal council had intervened with a joint note from the group leaders who asked the mayor, Filippo Nogarin, to work to get the important sculpture, which had been kept hidden for years, back to the city.

Nogarin had also attacked the Superintendent of Cultural Heritage (of Genoa and not of Pisa) who had approved the sale.