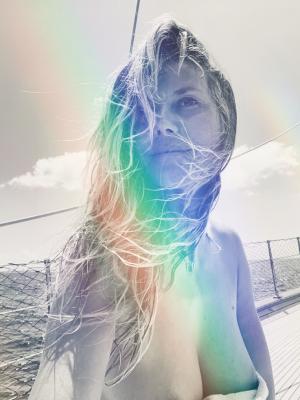 The photo, which shows Klum wrapped in a towel with left nipple showing, is captioned, All I see is water.

Many of her Instagram followers saw something else and criticized Klum, 46, saying she was too old to be exposing herself in this way.

“All I see is nipple,” wrote one follower.

“All I see is a midlife crisis,” commented another.

“Why do you have to take these kinds of pics! At your age and at any age, why do women constantly have to pose nude? And you are a mom! Age gracefully!” wrote another.

The snap, which has received 3,600 likes since it was posted Sunday, was defended by others.

“People that are scrutinizing Heidi Klum are just looking for something/someone to complain about. She is a strong, beautiful and poised women [sic] that doesn’t deserve to be under attack for showcasing sexuality,” wrote one supporter.

“It’s refreshing to see someone of a certain age who takes care of oneself, isn’t morbidly obese & isn’t sprinkled with tattoos. You can certainly be a role model for taking care of one’s body,” wrote another.

“You definitely show that age is all in the mind … you are forever young,” another remarked.

Klum had married 29-year-old Tokio Hotel musician Kaulitz in February, but the pair celebrated their nuptials twice, with a second lavish ceremony aboard a luxury yacht in Capri, Italy, on August 3. They have been honeymooning in Italy since.

Klum was previously married to “Kiss from a Rose” singer Seal.